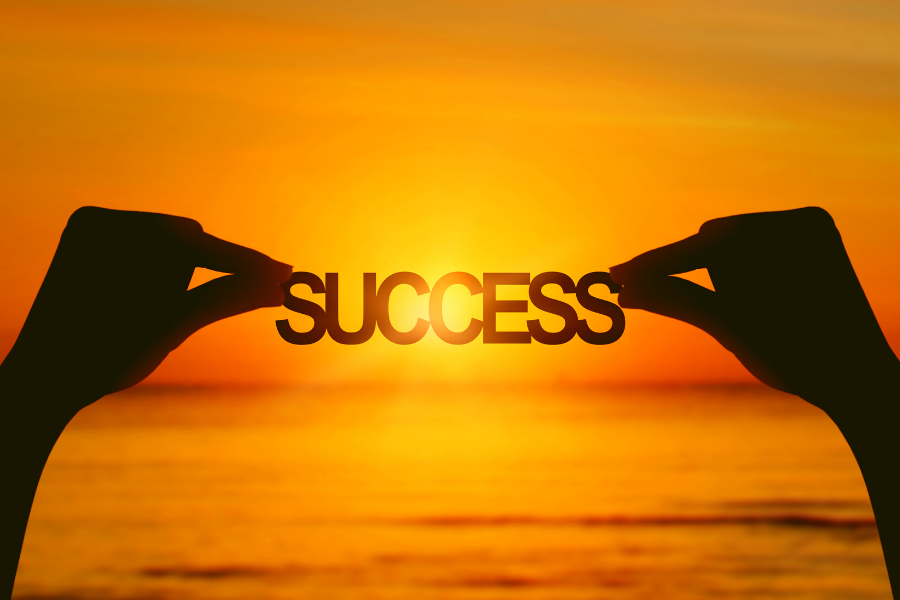 The secrets of success had long been sought after by everyone and its also quite elusive sometimes. If you’re here reading this, then you might be an aspirant as well and want some guidance to pave your way. The true measure of success may vary from one person to another but what matters the most is one’s commitment to push through against all odds. 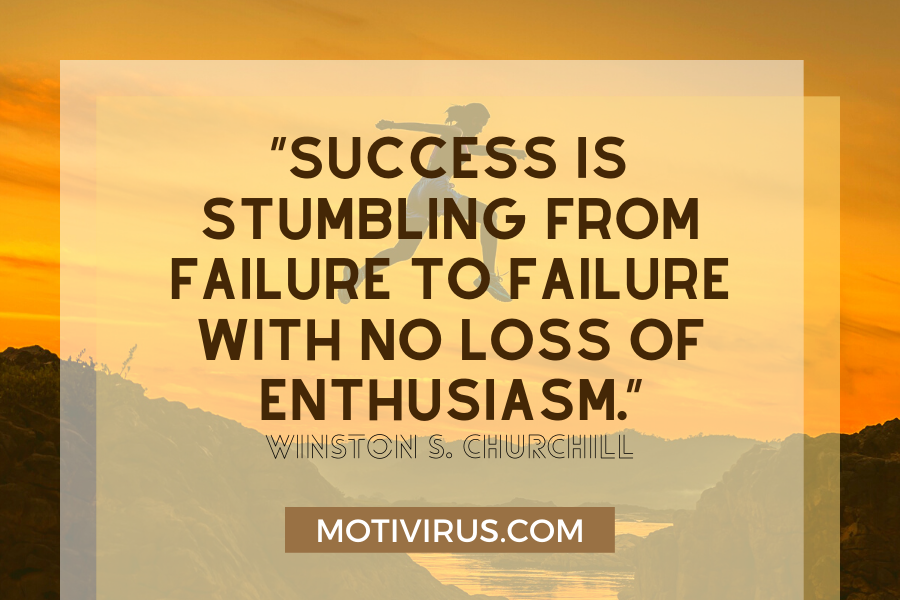 “Success is stumbling from failure to failure with no loss of enthusiasm.”
― Winston S. Churchill

“Let the improvement of yourself keep you so busy that you have no time to criticize others.”
― Roy T. Bennett 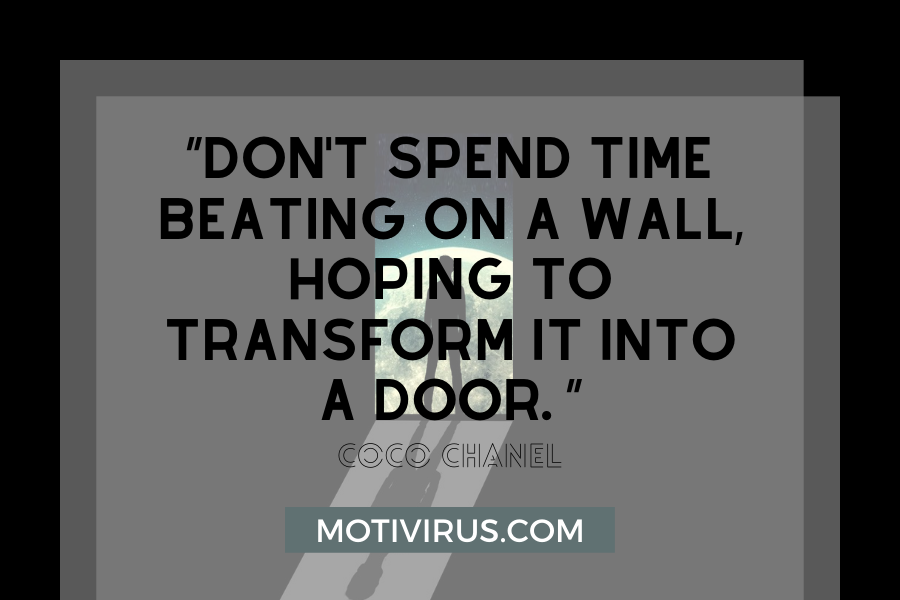 “Don’t spend time beating on a wall, hoping to transform it into a door. ”
― Coco Chanel

“Failure is the condiment that gives success its flavor.”
― Truman Capote 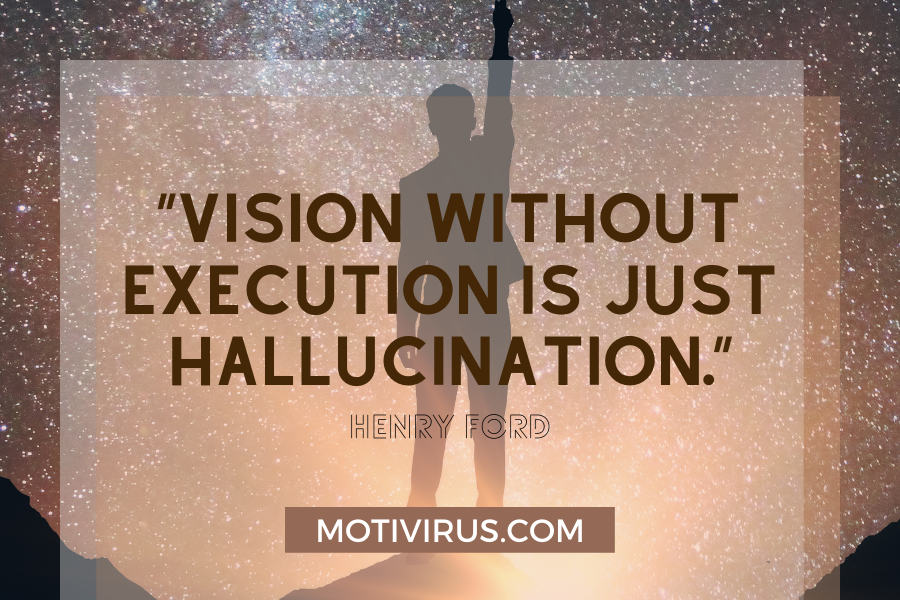 “Success means we go to sleep at night knowing that our talents and ablities were used in a way that served others.”
― Marianne Williamson

“Success is…
knowing your purpose in life,
growing to reach your maximum potential, and
sowing seeds that benefit others.”
― John C. Maxwell

“Don’t give up! It’s not over. The universe is balanced. Every set-back bears with it the seeds of a come-back.”
― Steve Maraboli

“To succeed in life, you need three things: a wishbone, a backbone and a funnybone.”
― Reba McEntire 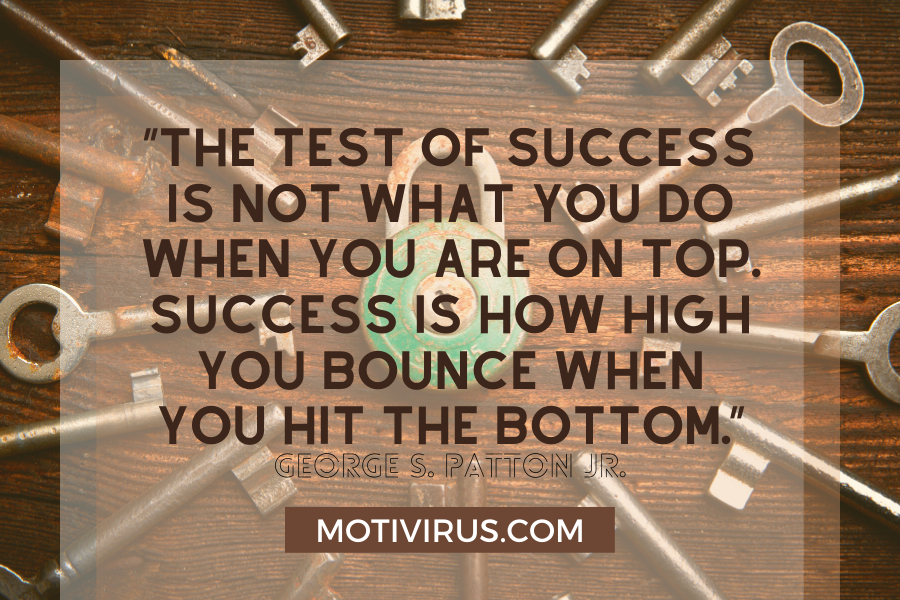 “The test of success is not what you do when you are on top. Success is how high you bounce when you hit the bottom.”
― George S. Patton Jr.

“The thermometer of success is merely the jealousy of the malcontents.”
― Salvador Dali 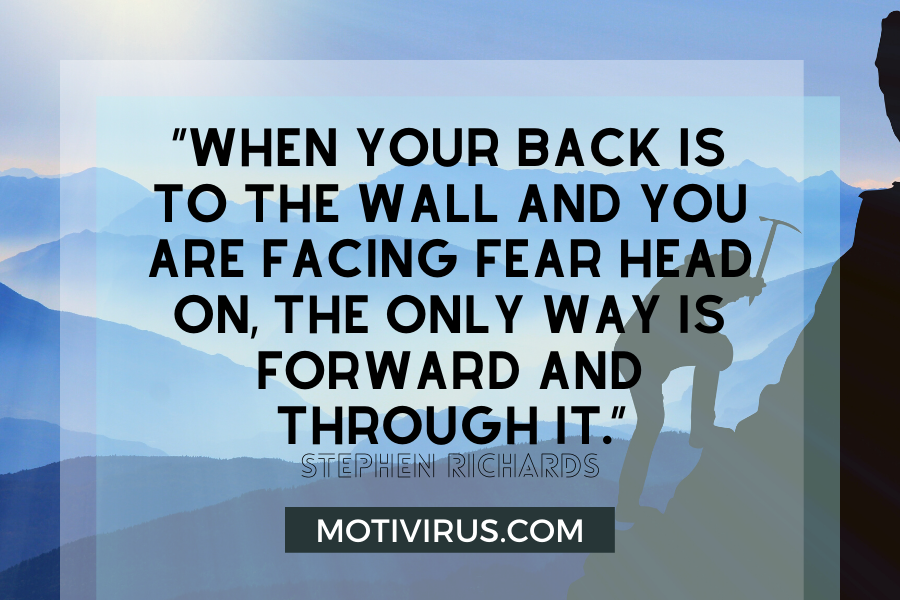 “When your back is to the wall and you are facing fear head on, the only way is forward and through it.”
― Stephen Richards

“Anyone whose goal is ‘something higher’ must expect someday to suffer vertigo. What is vertigo? Fear of falling? No, Vertigo is something other than fear of falling. It is the voice of the emptiness below us which tempts and lures us, it is the desire to fall, against which, terrified, we defend ourselves.”
― Milan Kundera 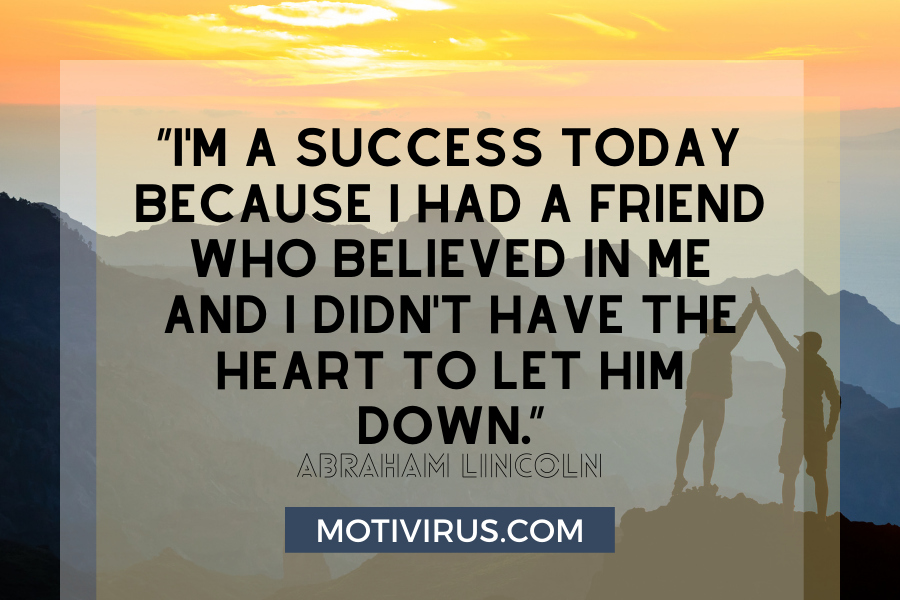 “I’m a success today because I had a friend who believed in me and I didn’t have the heart to let him down.”
― Abraham Lincoln

“All you need in this life is ignorance and confidence; then success is sure. ”
― Mark Twain

“Don’t aim at success. The more you aim at it and make it a target, the more you are going to miss it. For success, like happiness, cannot be pursued; it must ensue, and it only does so as the unintended side effect of one’s personal dedication to a cause greater than oneself or as the by-product of one’s surrender to a person other than oneself. Happiness must happen, and the same holds for success: you have to let it happen by not caring about it. I want you to listen to what your conscience commands you to do and go on to carry it out to the best of your knowledge. Then you will live to see that in the long-run—in the long-run, I say!—success will follow you precisely because you had forgotten to think about it”
― Viktor E. Frankl 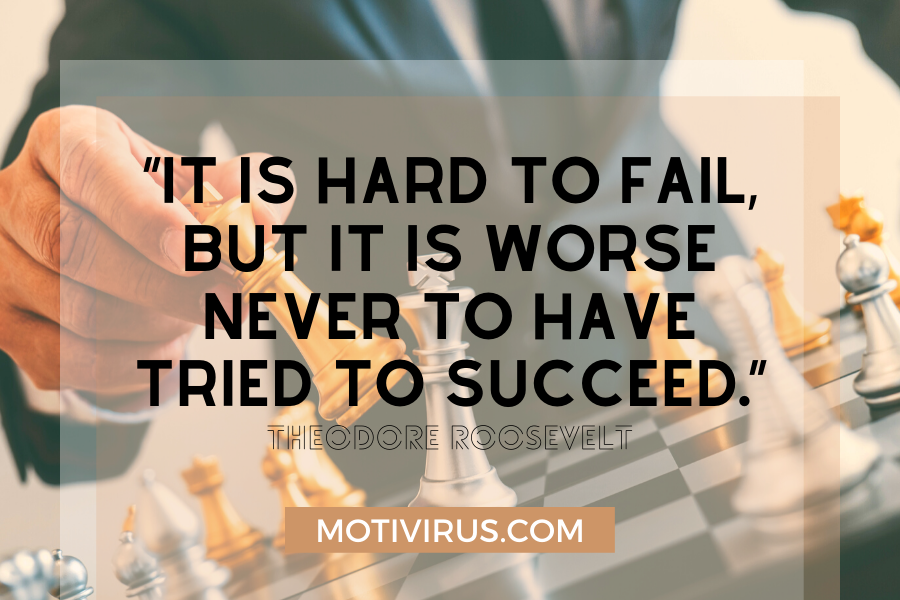 “It is hard to fail, but it is worse never to have tried to succeed.”
― Theodore Roosevelt

“How would your life be different if…You stopped making negative judgmental assumptions about people you encounter? Let today be the day…You look for the good in everyone you meet and respect their journey.”
― Steve Maraboli

“A thinker sees his own actions as experiments and questions–as attempts to find out something. Success and failure are for him answers above all.”
― Friedrich Nietzsche 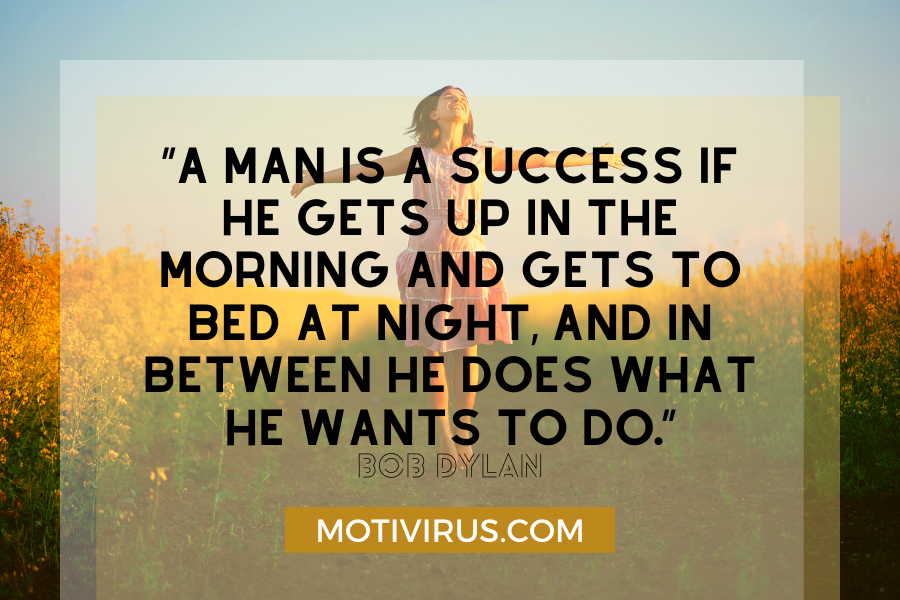 “A man is a success if he gets up in the morning and gets to bed at night, and in between he does what he wants to do.”
― Bob Dylan

“Success is most often achieved by those who don’t know that failure is inevitable.”
― Coco Chanel

“Each new day is a blank page in the diary of your life. The secret of success is in turning that diary into the best story you possibly can.”
― Douglas Pagels“Success is not obtained overnight. It comes in installments; you get a little bit today, a little bit tomorrow until the whole package is given out. The day you procrastinate, you lose that day’s success.”
― Israelmore Ayivor

“Success will be within your reach only when you start reaching out for it.”
― Stephen Richards 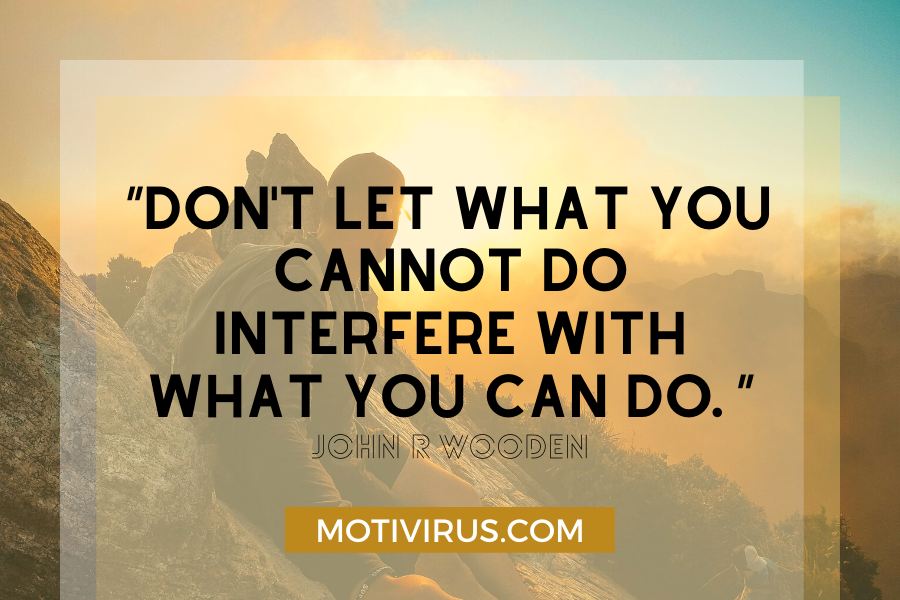 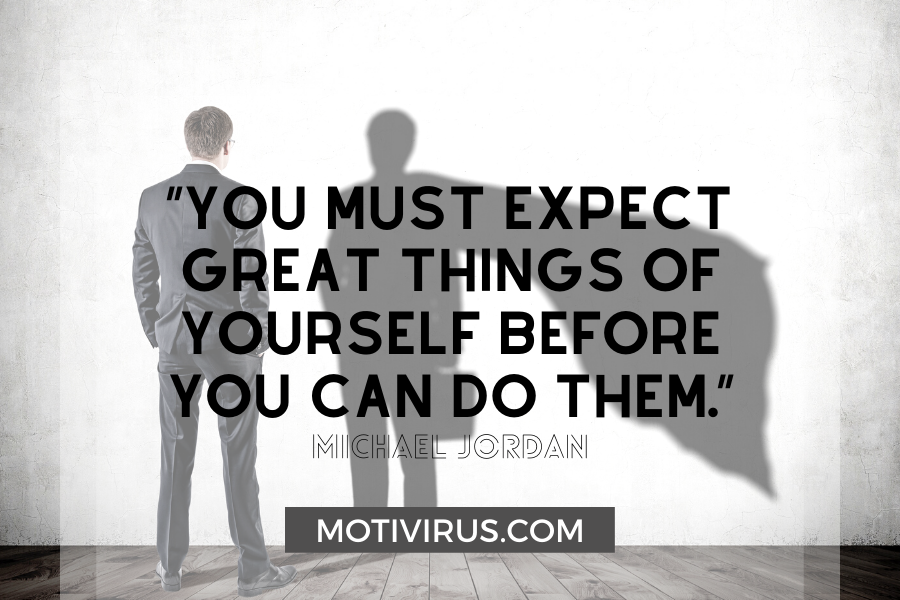 “You must expect great things of yourself before you can do them.”
― Michael Jordan

“It is in your moments of decision that your destiny is shaped. ”
― Anthony Robbins

“Sure it could get rough sometimes, but life wasn’t a Hollywood movie. Shit happened. You fought, you screamed, and somehow you worked like hell to get out the other side still intact.”
― Samantha Young 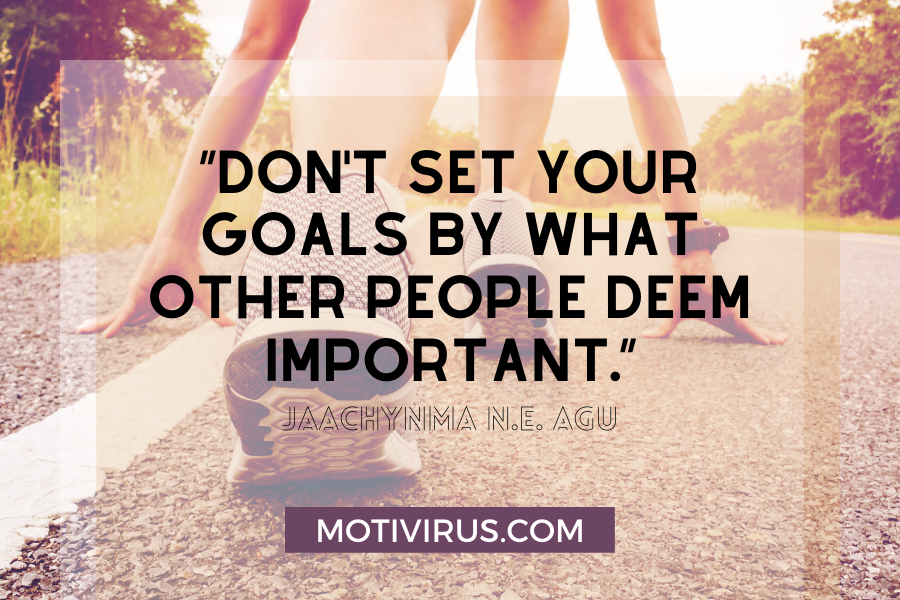 “Don’t set your goals by what other people deem important.”
― Jaachynma N.E. Agu

“To succeed in the world it is not enough to be stupid – one must also be polite.”
― Voltaire

“One of the lessons that I grew up with was to always stay true to yourself and never let what somebody else says distract you from your goals. And so when I hear about negative and false attacks, I really don’t invest any energy in them, because I know who I am.”
― Michelle Obama

“I want to do it because I want to do it. Women must try to do things as men have tried. When they fail, their failure must be but a challenge to others.”
― Amelia Earhart

“At the end of the day, let there be no excuses, no explanations, no regrets.”
― Steve Maraboli 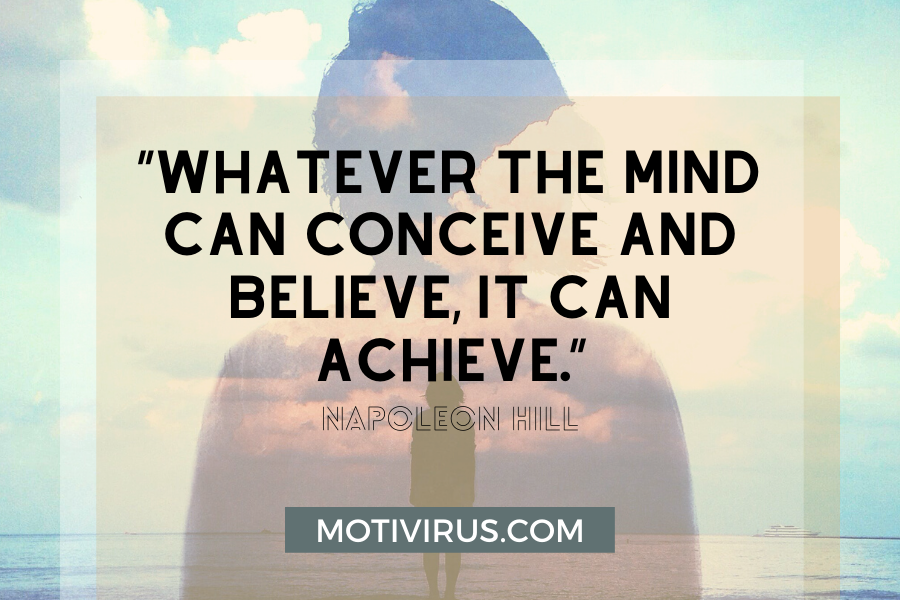 “Whatever the mind can conceive and believe, it can achieve.”
― Napoleon Hill

“Make a pact with yourself today to not be defined by your past. Sometimes the greatest thing to come out of all your hard work isn’t what you get for it, but what you become for it. Shake things up today! Be You…Be Free…Share.”
― Steve Maraboli

“Doubt kills more dreams than failure ever will.”
― Suzy Kassem
“There is no failure except in no longer trying.”
― Elbert Hubbard 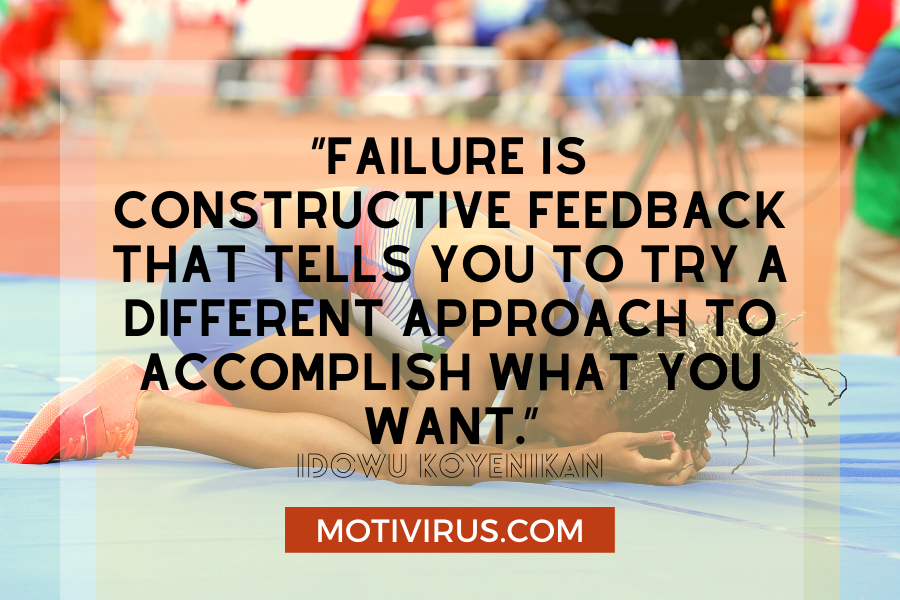 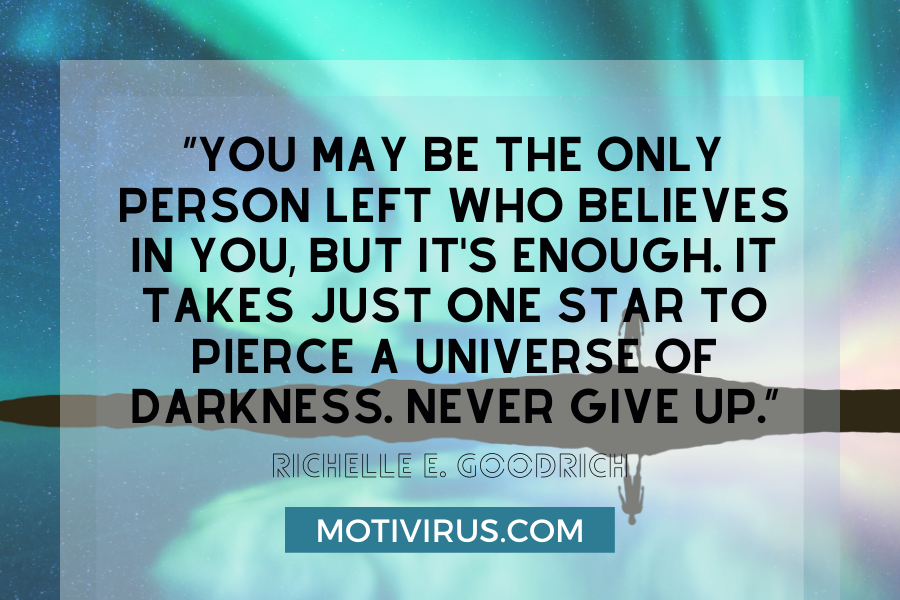 “You may be the only person left who believes in you, but it’s enough. It takes just one star to pierce a universe of darkness. Never give up.”
― Richelle E. Goodrich
“All the time you’re saying to yourself, ‘I could do that, but I won’t,’ — which is just another way of saying that you can’t.”
― Richard P. Feynman
“Having a low opinion of yourself is not ‘modesty.’ It’s self-destruction. Holding your uniqueness in high regard is not ‘egotism.’ It’s a necessary precondition to happiness and success.”
― Bobbe Sommer
“Our way of thinking creates good or bad outcomes.”
― Stephen Richards
“A quitter never wins-and-a winner never quits.”
― Napoleon Hill
“The world’s greatest achievers have been those who have always stayed focussed on their goals and have been consistent in their efforts.”
― Dr Roopleen
“No matter how small you start, always dream big.”
― Stephen Richards
“I do not like to repeat successes I like to go on to other things.”
― Walt Disney
“To get what you want, you have to deserve what you want. The world is not yet a crazy enough place to reward a whole bunch of
undeserving people.”
― Charles T. Munger 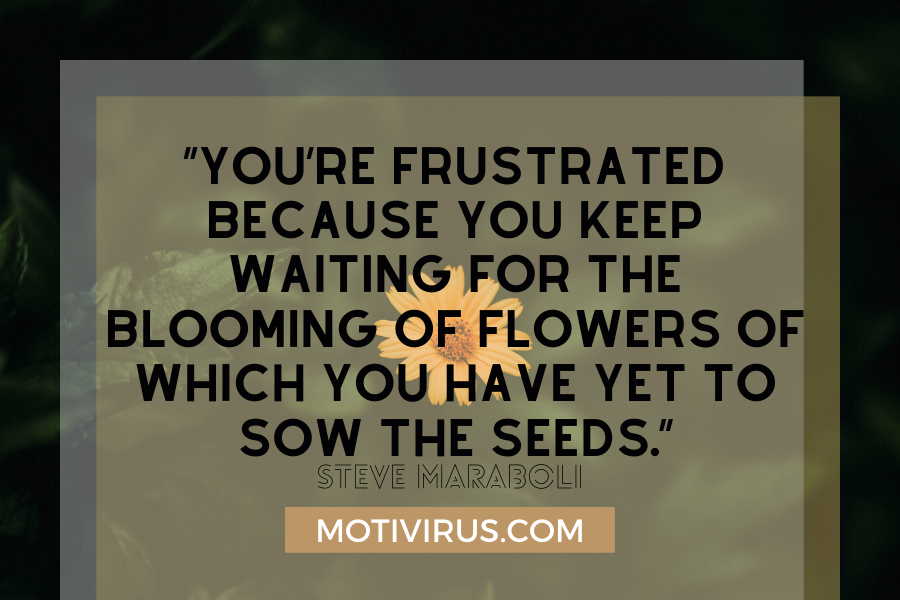 “You’re frustrated because you keep waiting for the blooming of flowers of which you have yet to sow the seeds.”
― Steve Maraboli
“Desire is the key to motivation, but it’s determination and commitment to an unrelenting pursuit of your goal – a commitment to excellence – that will enable you to attain the success you seek.”
― Mario Andretti

“Judge your success by what you had to give up in order to get it.”
― Dalai Lama XIV 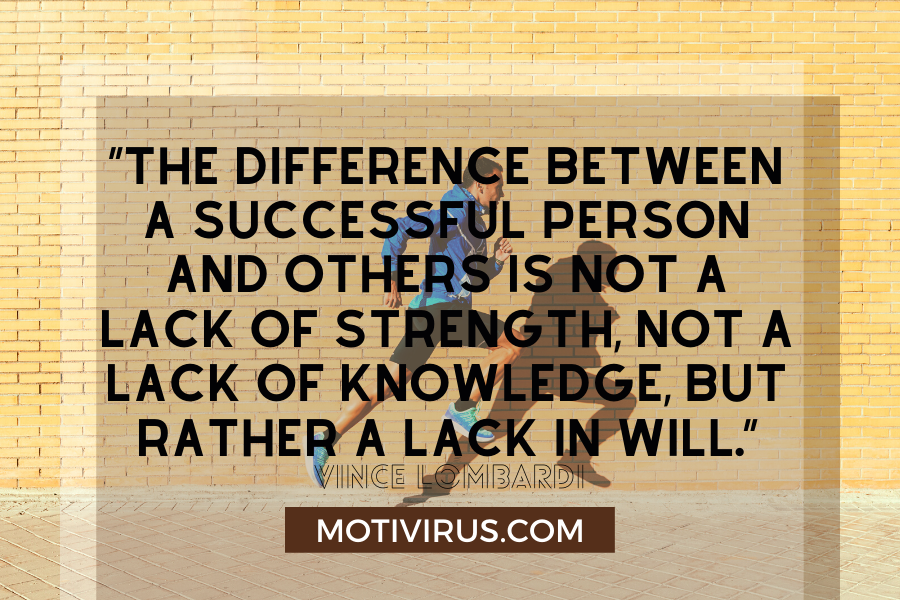 “The difference between a successful person and others is not a lack of strength, not a lack of knowledge, but rather a lack in will.”
― Vince Lombardi

“I’ve come to believe that each of us has a personal calling that’s as unique as a fingerprint – and that the best way to succeed is to discover what you love and then find a way to offer it to others in the form of service, working hard, and also allowing the energy of the universe to lead you. ”
― Oprah Winfrey

“Life always begins with one step outside of your comfort zone.” 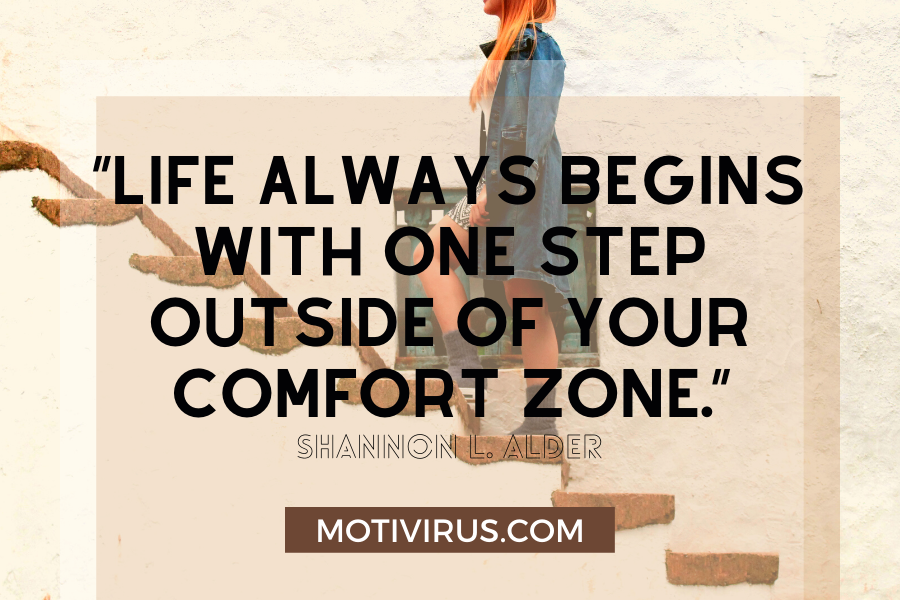 “Integrity is doing what is right and truthful, and doing as you say you would do.”
― Roy T. Bennett

“Edit your life frequently and ruthlessly. It’s your masterpiece after all.”
― Nathan W. Morris

“The real glory is being knocked to your knees and then coming back. That’s real glory. That’s the essence of it.”
― Vince Lombardi 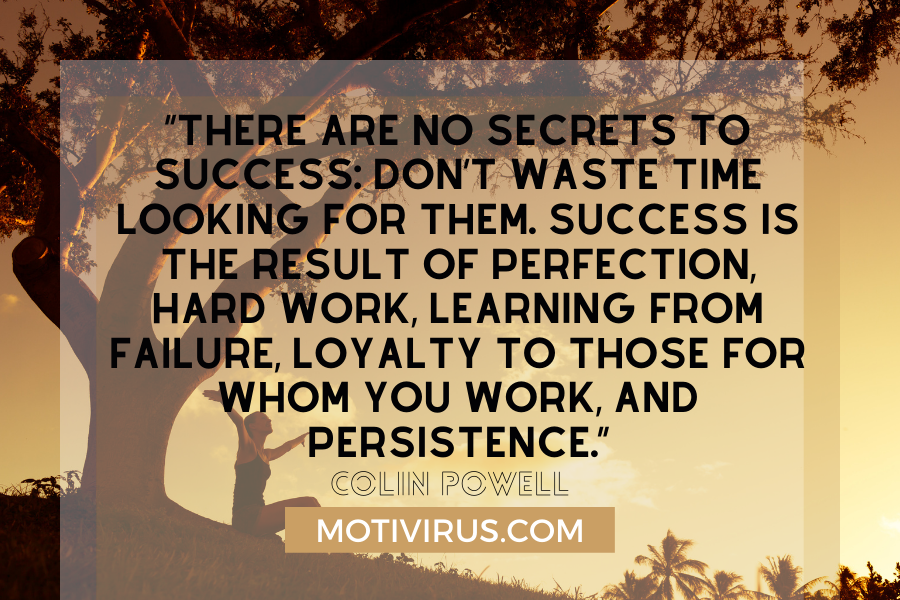 “There are no secrets to success: don’t waste time looking for them. Success is the result of perfection, hard work, learning from failure, loyalty to those for whom you work, and persistence.”
― Colin Powell

Whether you’re just a beginner towards realizing and doing the grind into achieving your dreams, the important thing is that you are already starting that journey. Discover more motivational quotes on leadership, productivity, and success here!

30 Best Motivational Quotes When You Are Burned Out