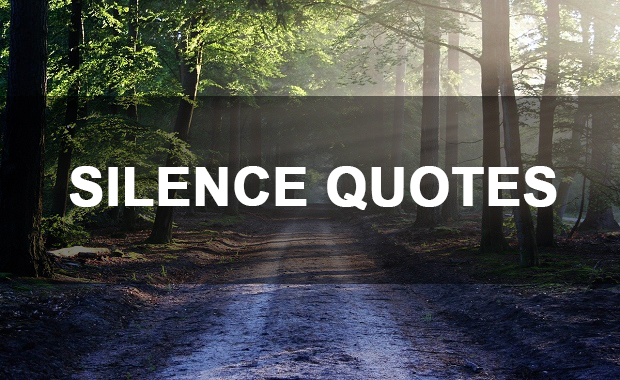 Silence speaks when words are unable to measure up. Silence can be more powerful than words itself. It can be the best answer sometimes. Silence is better than words that have no meaning and value. Some of the best silence quotes are listed below. You can read them and share them to express yourself.

Not every question asked requires an answer. Sometimes people deserve your silence instead of your attention. It shows a ton of meaning.

It is also better to work in silence and let your efforts be known through your results. Being too expressive can also lead to your exploitation by people. They don’t need to know everything about you. Keep your words reserved for only those people who deserve it.

Thus silence can also have a lot of different meanings. Just try to enjoy the pleasure of silence sometimes. It can be quite peaceful. We hope you find the quote which matches your mood.

2. “Sometimes you don’t have to say anything. Silence speaks it all.” – Disha Patani

4. ” Successful people always have two things on their lips. Silence and a smile. “

6. “Sometimes it’s better to let the silence do the talking.”

9. “Silence is the most powerful scream.”

11. “Words can sting like anything, but silence breaks the heart.” – Phyllis McGinley

12. “Silence is the sleep that nourishes wisdom.” – Francis Bacon

13. “Surely silence can sometimes be the most eloquent reply.” – Ali Ibn Abi Talib AS

16. “Don’t waste words on people deserve your silence. Sometimes the most powerful thing you can say is nothing at all.” – Mandy Hale

19. “Once you’ve matured you realize silence is more powerful than proving a point.”

20. “When you build in silence, they don’t know what to attack.”

22. “The most significant conversations of our lives occur in silence.” – Simon Van Booy

23. “Open your mouth only if what you are going to say is more beautiful than the silence.” – Spanish Proverb

27. “Sometimes it’s best to stay quiet. The silence can speak volumes without ever saying a word.”

29. “Never assume that loud is strong and quiet is weak.”

30. “Work hard in silence, let your success make the noise.”