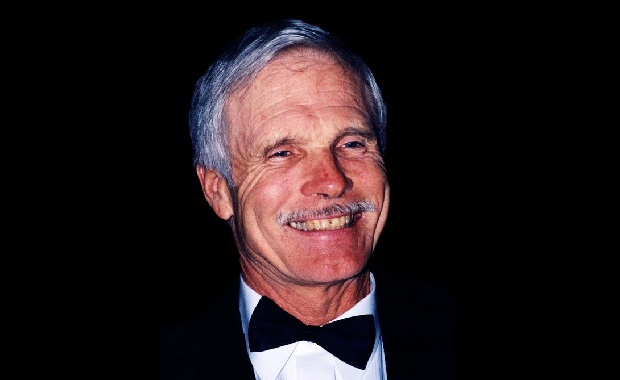 Ted Turner is an American philanthropist, media proprietor, and producer, who is regarded as the founder of Cable News Network (CNN), the first cable news channel to operate 24 hours a day.

Turner’s success in the media world can be credited to his father, who owned a successful company named Turner Outdoor Advertising. He took control of the company after his father’s death in 1963.

One of Turner’s most popular philanthropic activities which elevated his popularity even more was when he donated $1 billion to United Nations for carrying out charity works.

Ted Turner has written a number of quotes. They reflect his brilliance in business and entrepreneurship and they will definitely motivate you to succeed.

1. “Do something. Either lead, follow or get out of the way.” – Ted Turner

2. “You should set goals beyond your reach so you always have something to live for.” – Ted Turner

3. “To be happy in this world, first you need a cell phone and then you need an airplane. Then you’re truly wireless.” – Ted Turner

4. “Once you decide to do something, and you’re pretty sure you’re right, then you gotta go ahead and do it. Because if you piddle around, somebody else will beat you to it.” – Ted Turner

5. “If there is a God, he is not doing a good job of protecting the earth. He’s kind of checked out.” – Ted Turner

8. “I don’t measure success in numbers, but I consider my contributions of more than $1.3 billion to various causes over the years to be one of my proudest accomplishments and the best investment I’ve ever made. Those dollars have improved lives, saved species, fought disease, educated children, inspired change, challenged ideas and opened minds; at the time of my death, virtually all of my wealth will have gone to charity.” – Ted Turner

9. “The mind is just another muscle.” – Ted Turner

12. “If you treat people with dignity, respect and friendliness, you can turn enemies into friends. An enemy is nothing but a friend in disguise.” – Ted Turner

15. “I just love it when people say I can’t do something. There’s nothing that makes me feel better, because all my life people have said I wasn’t going to make it.” – Ted Turner

16. “There’s nothing wrong with being fired.” – Ted Turner

17. “Struggling hard to achieve something is the most fun I get.” – Ted Turner

19. “Exposure to defeat is a very important thing. Anyone who doesn’t look to get beaten is doing a disservice to himself.” – Ted Turner

21. “If you can get yourself where you’re not afraid of dying, then you can move forward a lot faster.” – Ted Turner

22. “Never set goals you can reach in your lifetime.” – Ted Turner

26. “I didn’t care what or how much adversity life threw at me. I intended to get to the top.” – Ted Turner

27. “It’s going to cost trillions of dollars to rework the energy sources all over the world. We’re going to have to move away from fossil fuels.” – Ted Turner

29. “When you lose small businesses, you lose big ideas. People who own their own businesses are their own bosses. They are independent thinkers. They know they can’t compete by imitating the big guys; they have to innovate. So they are less obsessed with earnings than they are with ideas.” – Ted Turner

32. “The whole idea of television news or any kind of news is to inform people about things they need to know about.” – Ted Turner

33. “I’ve never run into a guy who could win at the top level in anything today and didn’t have the right attitude, didn’t give it everything he had, at least while he was doing it; wasn’t prepared and didn’t have the whole program worked out.” – Ted Turner

37. “I mean, there’s no point in sittin’ around and cryin’ about spilt milk. Gotta move on.” – Ted Turner

38. “Every man sees a little of himself in Rhett Butler.” – Ted Turner

41. “Every action or inaction has an impact-good or bad-upon our surroundings, and anything we do today will have an impact on the lives of our grandchildren.” – Ted Turner

42. “I’ve always tried to do the smartest and best thing.” – Ted Turner

44. “Looking back, if I had to live my life over, there are things I would do differently, but the one thing I would not change is my charitable giving. I’m particularly thankful for my father’s advice to set goals so high that they can’t possibly be achieved during a lifetime and to give help where help is needed most. That inspiration keeps me energized and eager to keep working hard every day on giving back and making the world a better place for generations to come.” – Ted Turner

50 Trent Shelton Quotes on Life, Love, and Moving On