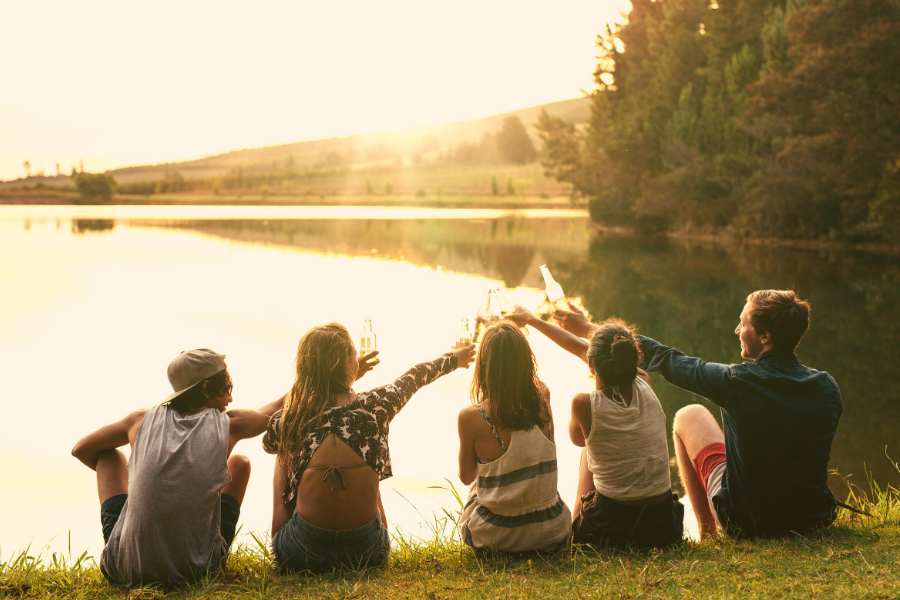 Adulting is a rocky path that all of us will have to traverse for the rest of our lives. There are just so many things we didn’t learn in school right? It seems like the universe is conspiring to grapple our way into adulthood with little to no guidance. While this may not be always true, most adults would agree that adulting is just hard! In fact, according to a financial survey, people in their 20s or 30s are finding it difficult to achieve financial freedom and adulting in general. While the going could be tough that doesn’t mean we can’t read up on funny and inspirational quotes about it! 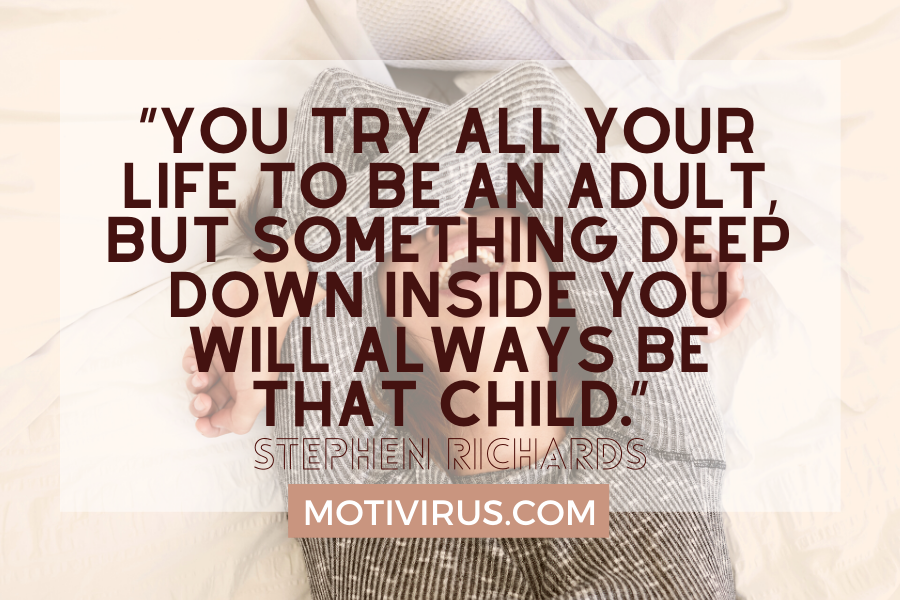 “You try all your life to be an adult, but something deep down inside you will always be that child.”
― Viv Albertine 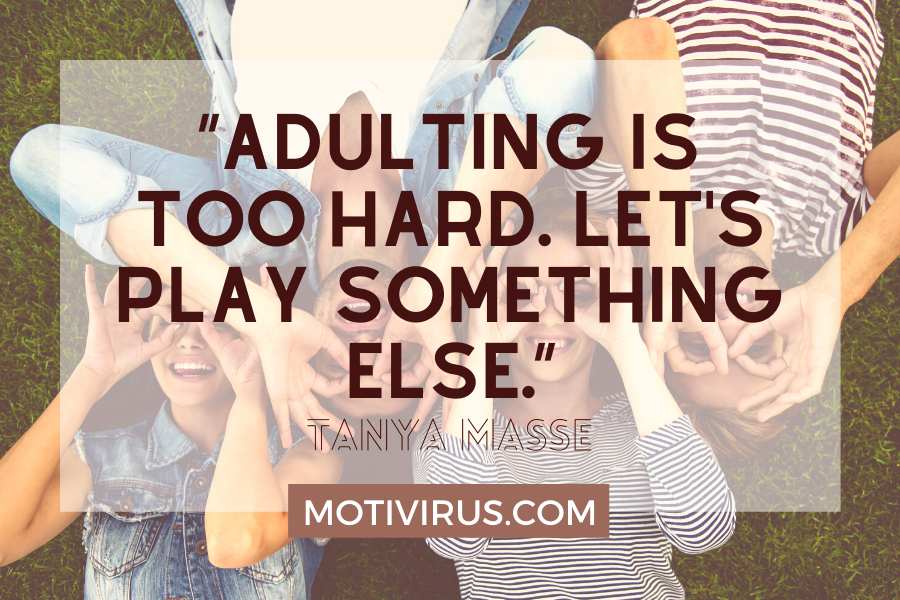 “Adulting is too hard. Let’s play something else.”
― Tanya Masse

“It’s like the older you get the more you forget that you can change things.”
― Tillie Walden

“Don’t worry about any of this stuff, okay?
It’s all just adult junk that doesn’t mean anything.”
― Jillian Tamaki

“I realized I would be forced to run away from home if someone tried to arrange a marriage for me. I didn’t want to think about it.”
― Elizabeth Wein 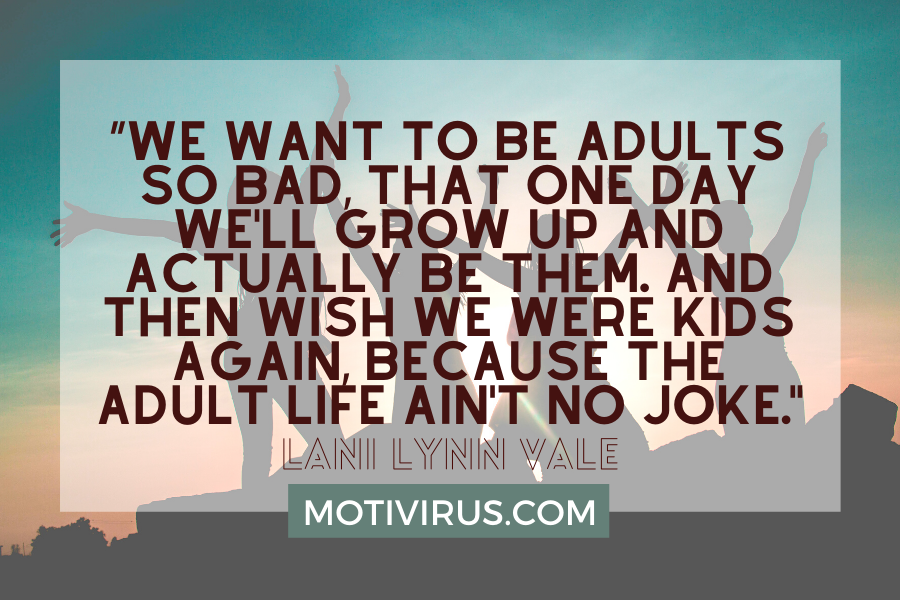 “We want to be adults so bad, that one day we’ll grow up and actually be them. And then wish we were kids again, because the adult life ain’t no fucking joke.”
― Lani Lynn Vale

“If you’re going to be a grown-up,” said Joan, “you’ve got to start thinking about grown-up things. And number one is money.”
― Julian Barnes 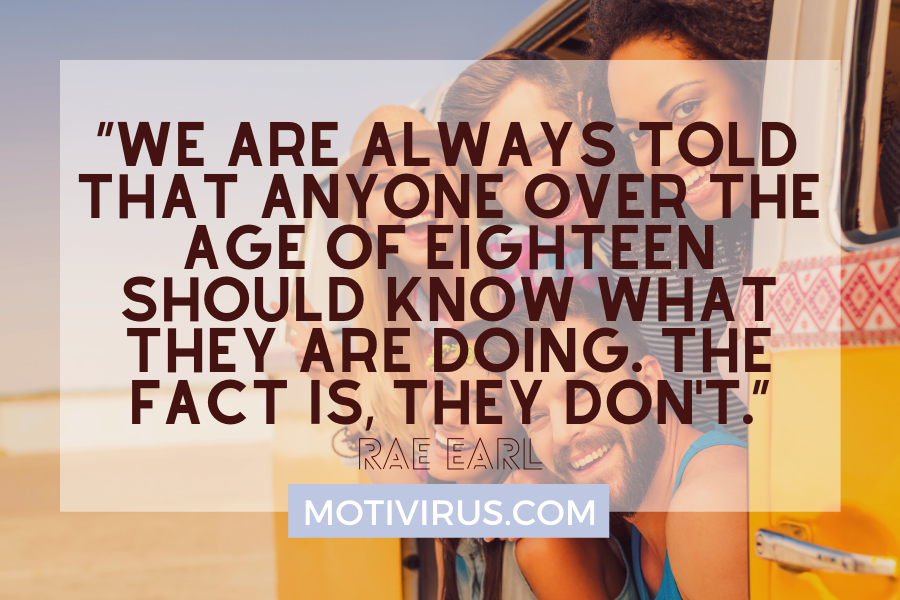 “We are always told that anyone over the age of eighteen should know what they are doing. The fact is, they don’t.”
― Rae Earl

“The days were like grown-up people, the mornings always young.”
― Halldór Laxness 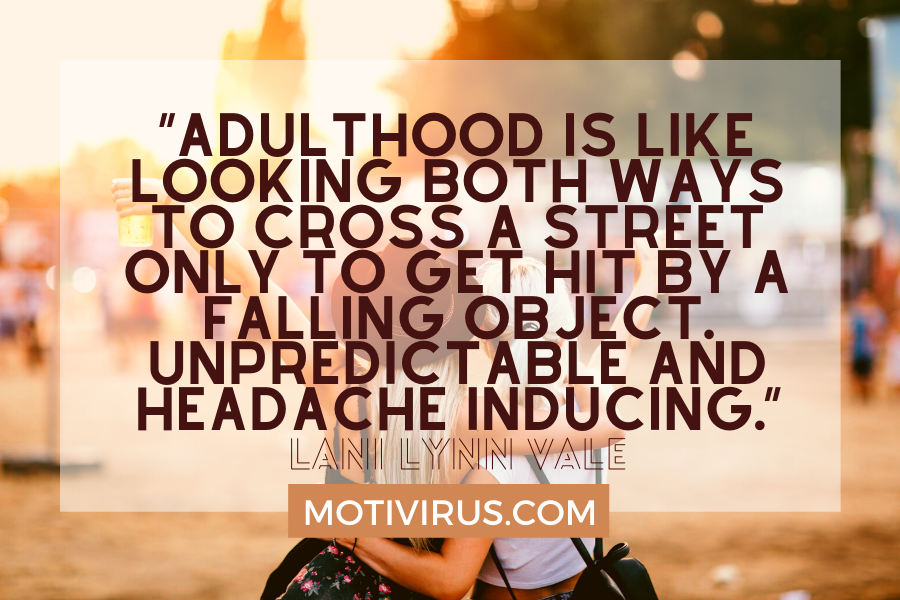 “Adulthood is like looking both ways to cross a street only to get hit by a falling object. Unpredictable and headache inducing.”
― Lani Lynn Vale 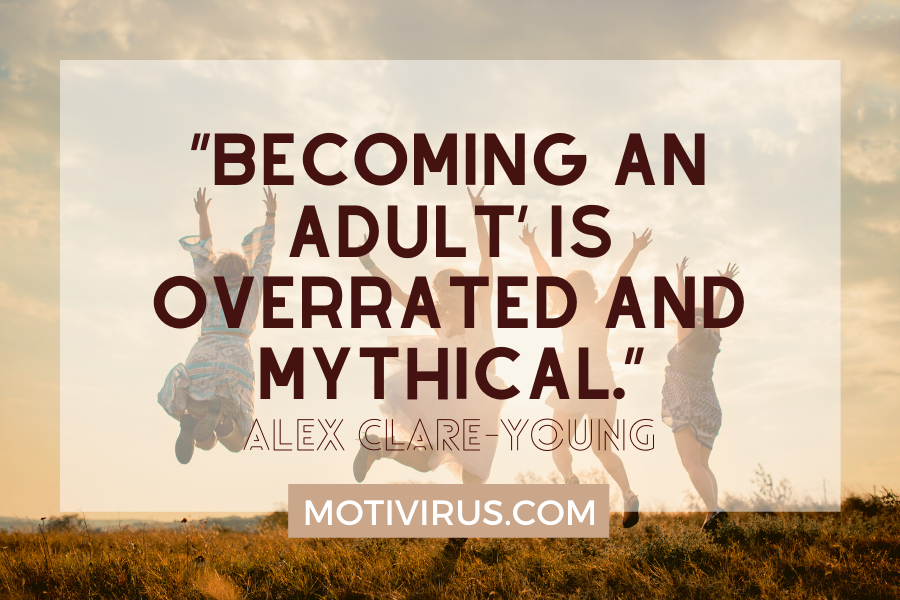 “Becoming an adult’ is overrated and mythical.”
― Alex Clare-Young 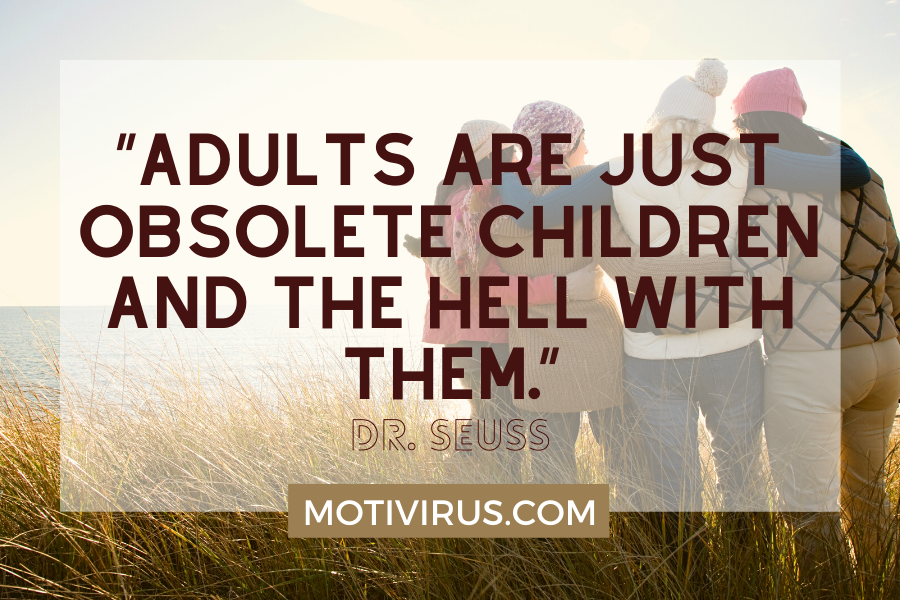 “Adults are just obsolete children and the hell with them.”
― Dr. Seuss

“Don’t you find it odd,” she continued, “that when you’re a kid, everyone, all the world, encourages you to follow your dreams. But when you’re older, somehow they act offended if you even try.”
― Ethan Hawke 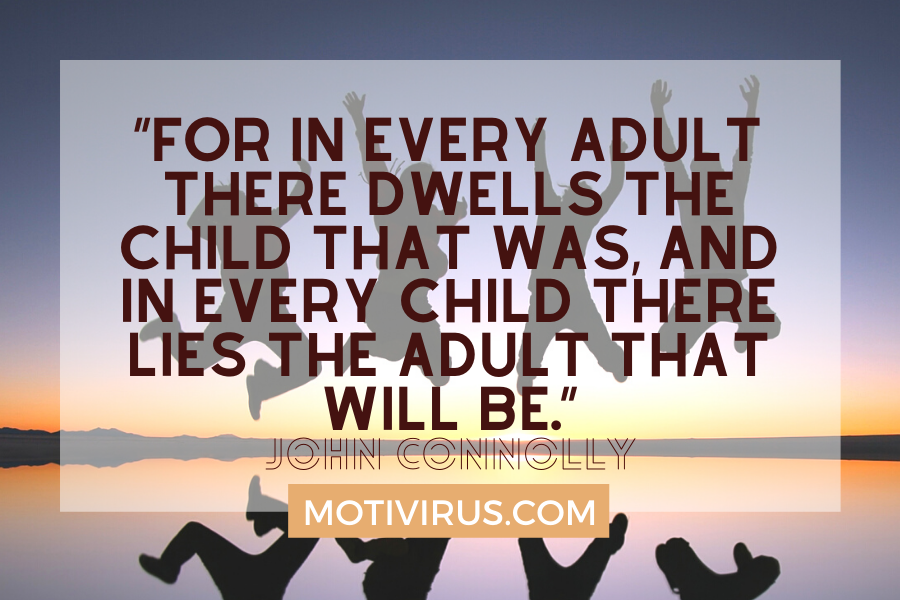 “For in every adult there dwells the child that was, and in every child there lies the adult that will be.”
― John Connolly

“As a child I assumed that when I reached adulthood, I would have grown-up thoughts.”
― David Sedaris

“I am convinced that most people do not grow up…We marry and dare to have children and call that growing up. I think what we do is mostly grow old. We carry accumulation of years in our bodies, and on our faces, but generally our real selves, the children inside, are innocent and shy as magnolias.”
― Maya Angelou

“The body grows slowly and steadily but the soul grows by leaps and bounds. It may come to its full stature in an hour.”
― L.M. Montgomery 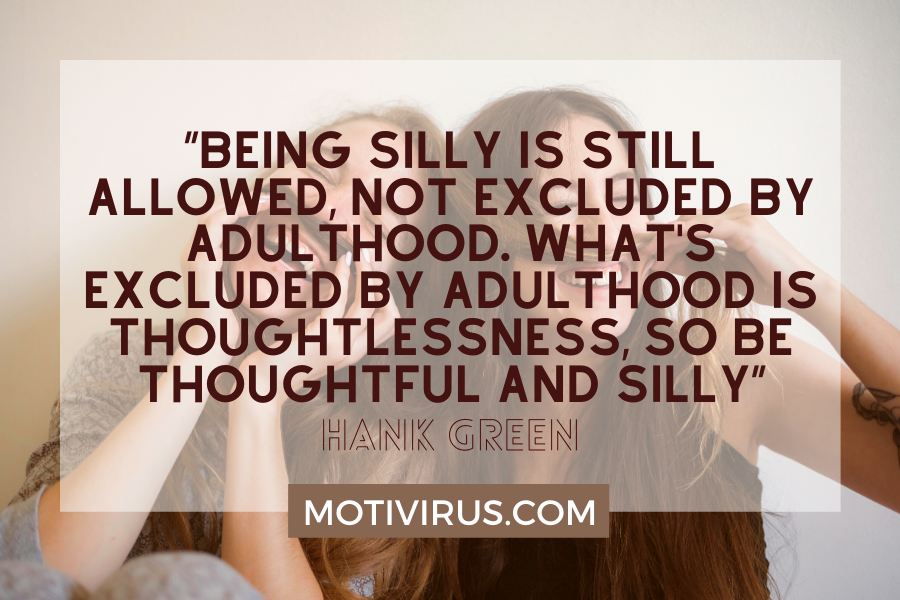 “People never grow up, they just learn how to act in public.”
― Bryan White 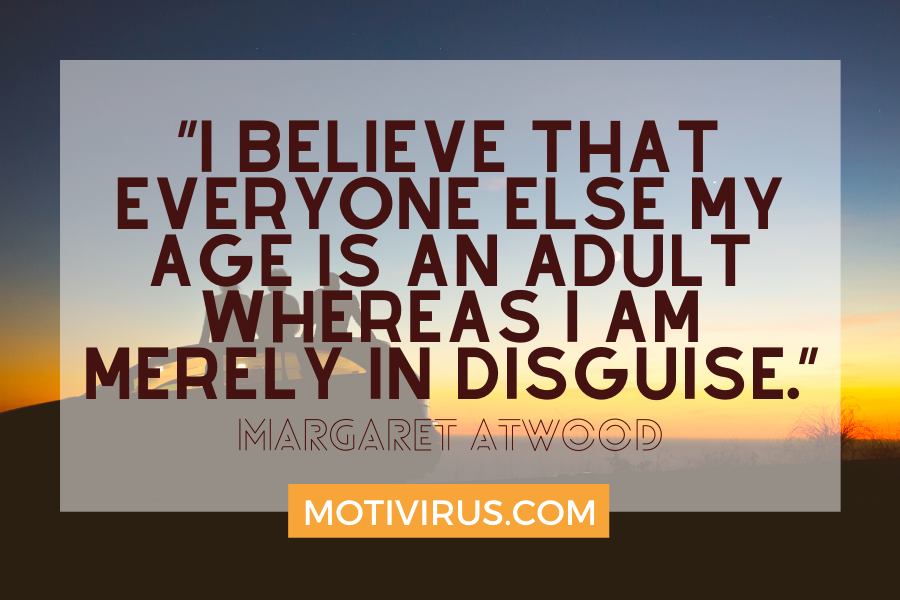 “I believe that everyone else my age is an adult whereas I am merely in disguise.”
― Margaret Atwood 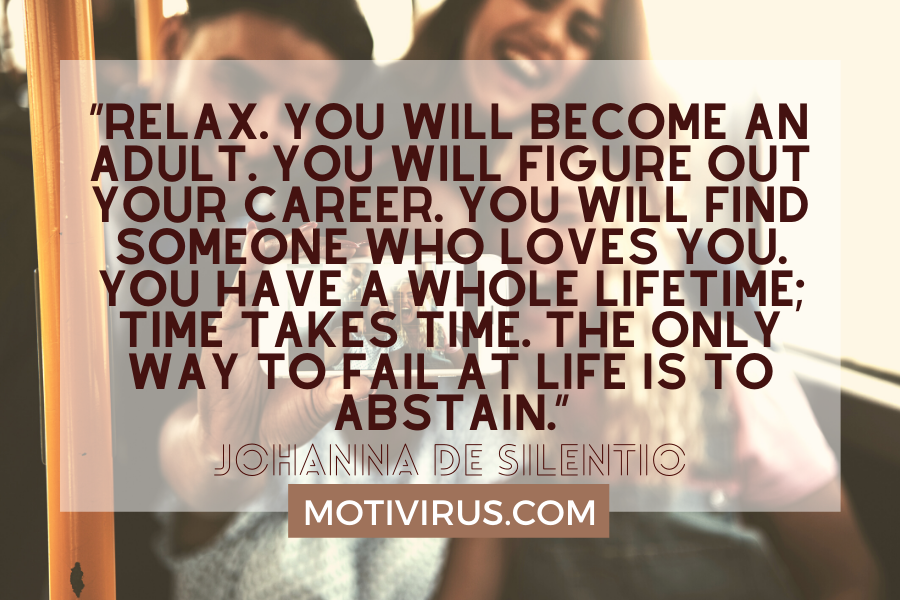 “Relax. You will become an adult. You will figure out your career. You will find someone who loves you. You have a whole lifetime; time takes time. The only way to fail at life is to abstain.”
― Johanna de Silentio

“I kept thinking there were two kinds of adults: There were…miserable creatures who scoured the earth in search of something to hurt. And then there were people like my parents, who walked around zombically, doing whatever they had to do to keep walking around.”
― John Green 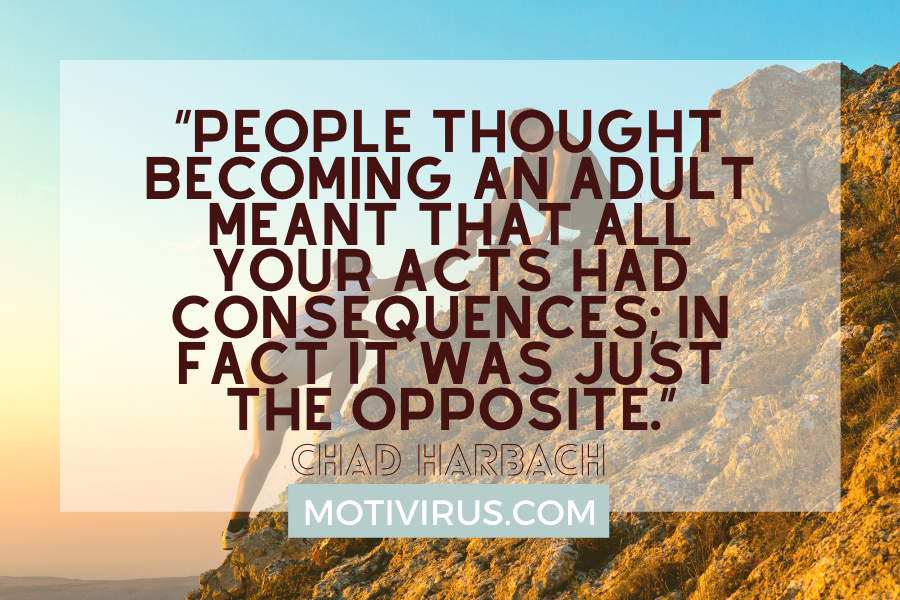 “People thought becoming an adult meant that all your acts had consequences; in fact it was just the opposite.”
― Chad Harbach

“I thought that once I got to this city nothing could ever catch up with me because I could remake my life daily. Once that had made me feel infinite. Now I was certain I would never learn. Being remade was the same thing as being constantly undone.”
― Stephanie Danler

“As a man begins to understand the sacrifices he must make to live the life he dreams of, he often loses his courage for such a life.”
― Josie Sigler 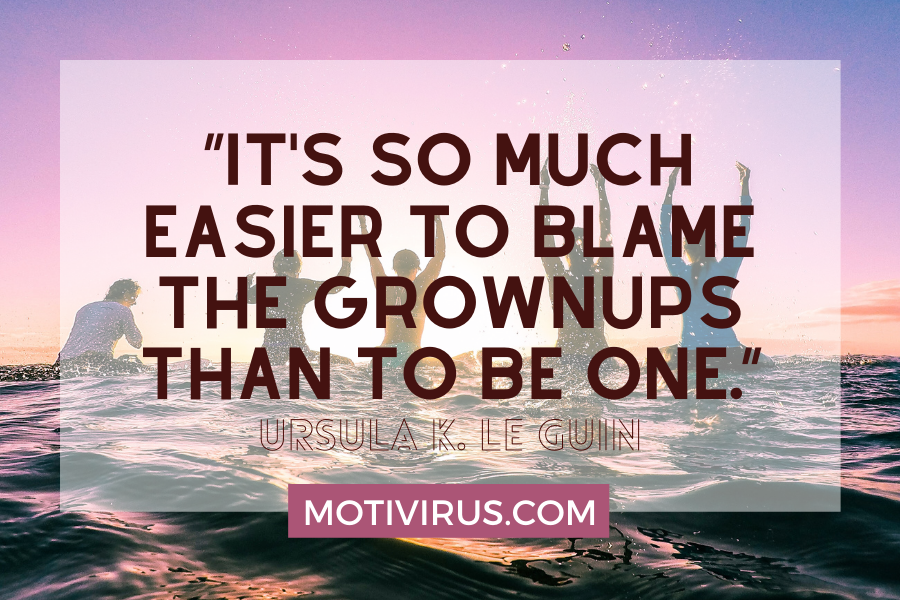 “It’s so much easier to blame the grownups than to be one.”
― Ursula K. Le Guin

“High school never ends’ is said by those who peak in high school and die in anonymity. We have to grow out of high school.”
― Revan Badingham III 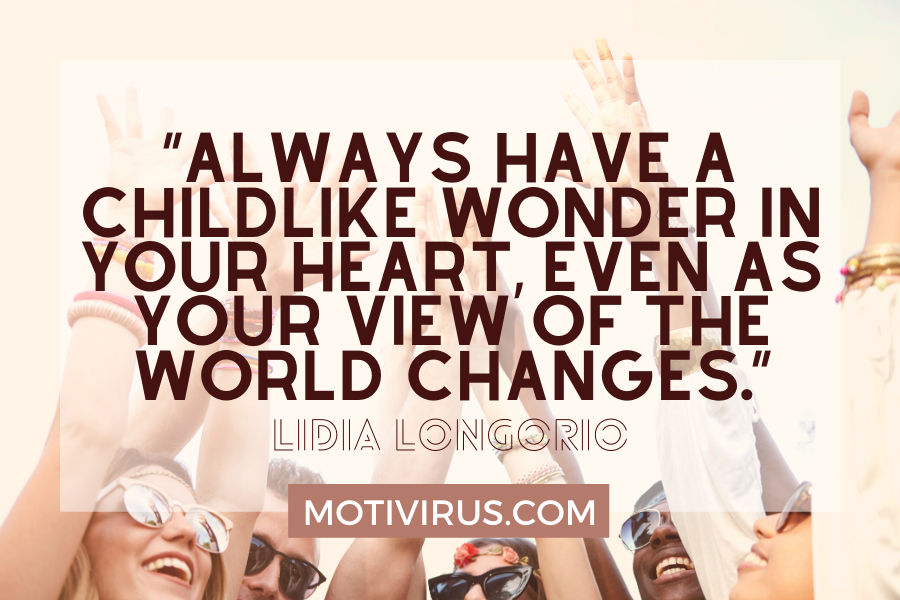 “Always have a childlike wonder in your heart, even as your view of the world changes.”
― Lidia Longorio

“The adults forgot to tell the kids there isn’t much to do,
That all this free time is quite hard to get through.
You can read a nice novel and paint something new,
But those activities are actually pretty isolating too.
That’s why we glance over at red lights, curious if others feel it too.”
― Karl Kristian Flores

“It is a measure of true adulthood that we are able to imagine our parents as the people they may have been before us.”
― Dani Shapiro 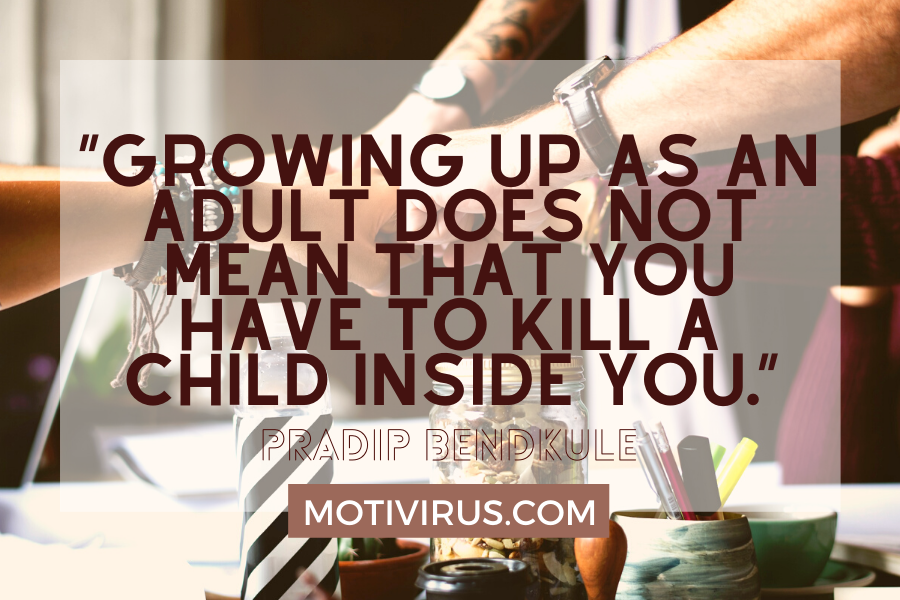 “Growing up as an adult does not mean that you have to kill a child inside you.”
― Pradip Bendkule

“You try all your life to be an adult, but something deep down inside you will always be that child.”
― Viv Albertine 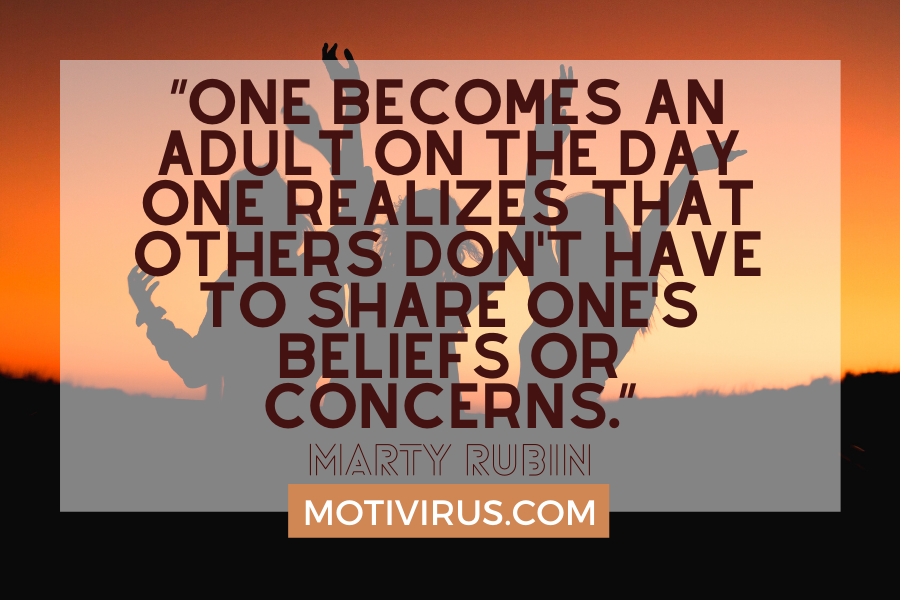 “One becomes an adult on the day one realizes that others don’t have to share one’s beliefs or concerns.”
― Marty Rubin

“It is unfortunate that the mistakes of the parents are so easy to spot, while those of the children are yet to be committed.”
― Yanko Tsvetkov

“You’re a bit young for this,’ she said, ‘but as you grow older you’ll find most people don’t set foot outside their own heads much. You too,’ she added gnomically.”
― Terry Pratchett

“We’re all small and harmless once, Archidi. But we all grow up. And some of us grow up needing killing.”
― Richard K. Morgan

“We simply relegate the child within us to some place where it will not interrupt adulthood. But do we not realize that it is the act of doing that that interrupts adulthood?”
― Craig D. Lounsbrough 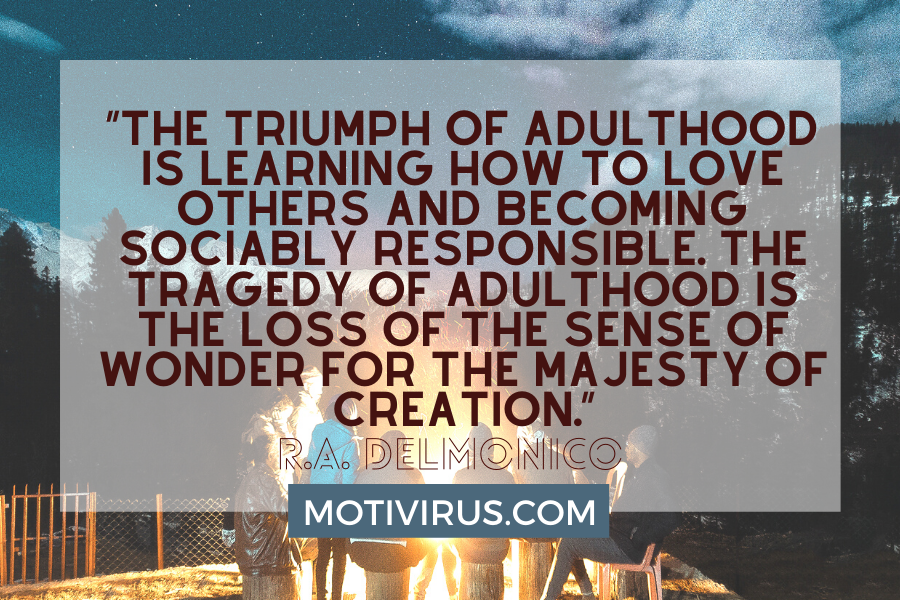 “The triumph of adulthood is learning how to love others and becoming sociably responsible. The tragedy of adulthood is the loss of the sense of wonder for the majesty of creation.”
― R.A. Delmonico

“As an adult, when you’re with your siblings, part of you is always a child, attached to childhood patterns of behavior and associations. All the jokes and gestures, affections and resentments.”
― Anne Gisleson

Adulting is never easy and while we’re probably gonna commit a lot of mistakes along the way we all can learn from people who have done a lot of mistakes as well! If you want to read more about adulting stuff, try out these motivational quotes on success by successful people.