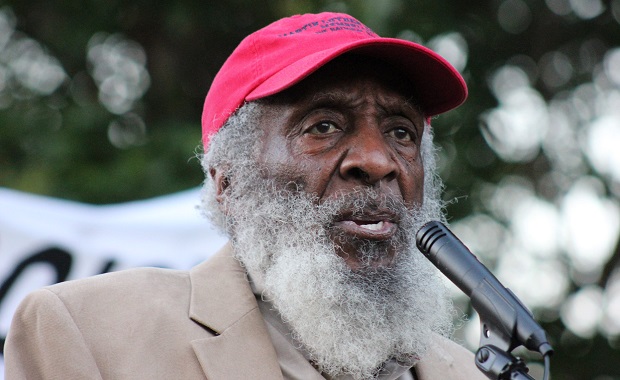 Dick Gregory was an extremely popular American civil rights activist, writer, entrepreneur, and a comedian. He is best known for being the first Black-American comedian who performed for the white audience.

Gregory is also remembered for speaking publicly against racial discrimination and political injustices. In the 1960s, he was arrested several times for carrying out protests against Vietnam War and racial unjust.

During his comedy career, Gregory used to mock and insult racists in a humorous way. This created controversies amongst white audiences. But eventually, his wit and humor made him very popular. His book “Nigger,” which was published in 1964, was a perfect demonstration of his writing capability.

Dick Gregory has written a lot of quotes which are powerful. His tenacity for fighting what is right will make you stand up for your rights and fight for what you believe in.

2. “The most difficult thing to get people to do is to accept the obvious.” – Dick Gregory

3. “The only good thing about the good old days is they’re gone.” – Dick Gregory

5. “Laughter is the best way to release tensions and fears.” – Dick Gregory

6. “I never learned hate at home, or shame. I had to go to school for that.” – Dick Gregory

8. “When you’ve got something really good, you don’t have to force it on people. They will steal it!” – Dick Gregory

9. “Dear Momma – Wherever you are, if ever you hear the word “nigger” again, remember they are advertising my book.” – Dick Gregory

10. “One of the things I keep learning is that the secret of being happy is doing things for other people.” – Dick Gregory

11. “I was learning that just being a Negro doesn’t qualify you to understand the race situation any more than being sick makes you an expert on medicine.” – Dick Gregory

12. “If all you can do is judge a person by their appearance, because you don’t have the spirit to judge someone from within, you’re in trouble.” – Dick Gregory

13. “Makes you wonder. When I left St. Louis, I was making five dollars a night. Now I’m getting $5,000 a week – for saying the same things out loud I used to say under my breath.” – Dick Gregory

14. “My belief is, you know, certain things have to be explained that’s never been explained.” – Dick Gregory

15. “Love is very dangerous if you just have love and don’t have the ability to be lovable.” – Dick Gregory

16. “Revolution ain’t nothing but an extent of evolution; Evolution is a fact of nature. So when old folks tell me that they don’t understand hip hop and the music is too loud, well I guess it means you’re not supposed to be in there.” – Dick Gregory

17. “Poor is a state of mind you never grow out of, but being broke is just a temporary condition.” – Dick Gregory

18. “When you have a good mother and no father, God kind of sits in. It’s not enough, but it helps.” – Dick Gregory

19. “When I lost my rifle, the Army charged me 85 dollars. That is why in the Navy the Captain goes down with the ship.” – Dick Gregory

20. “Everything we do we should look at in terms of millions of people who can’t afford it.” – Dick Gregory

21. “In most places in the country, voting is looked upon as a right and a duty, but in Chicago it’s a sport.” – Dick Gregory

22. “I never believed in Santa Claus because I knew no white dude would come into my neighborhood after dark.” – Dick Gregory

23. “Humans were the only creatures in the world that ate their food cooked. You’d never find a Gorilla frying up some bananas for dinner or a lion charcoal-broiling a zebra steak. Cats don’t often run to the oven with a mouse or bird they’ve captured, and a dog wouldn’t naturally prepare its rabbit dinner in a stew.” – Dick Gregory

24. “Once I realised the value of making people laugh, I got very good at it. Fast.” – Dick Gregory

25. “If they took all the drugs, nicotine, alcohol and caffeine off the market for six days, they’d have to bring out the tanks to control you.” – Dick Gregory