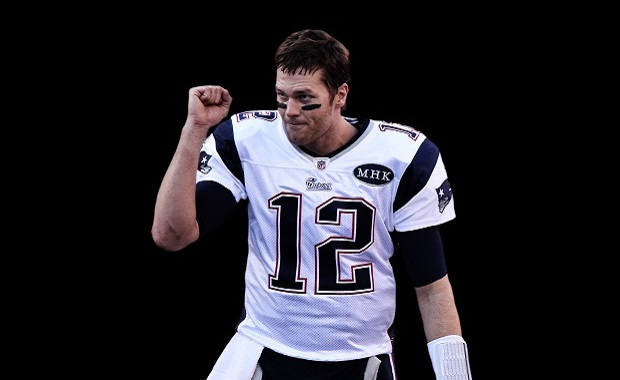 One of the greatest football quarterbacks in history, Tom Brady has played for the New England Patriots for 18 seasons so far, the most number of seasons ever played by any player with the same franchise.

He is also one of the two players to have won 5 Super Bowls and the only player to do so by playing in just one team. His achievements do not stop there; he also went on to win 4 MVP (Super Bowl) awards which is the most number of awards ever won by a single player.

After he graduated from the University of Michigan, Brady was selected only 199th overall in 2000 by the New England Patriots. Since then, he has continued to play with the team.

After his entry into the team, he has led the Patriots in winning a total of 5 Super Bowls out of a total of 8 appearances, which is the most Super Bowls ever won in NFL history by a quarterback.

Tom Brady has written many inspirational quotes which gives us insights about the person and how he went on to become a phenomenal sportsperson.

30 Tom Brady Quotes That Will Inspire You to Succeed

4. “I knew I became a professional when I stop paying attention to what time it was.” – Tom Brady

6. “I have a memory, and I can just eliminate mistakes when they come up because I’ve already made them.” – Tom Brady

7. “The only thing I believe that limits us is time. What do we want to do with this time? And see what’s important. It’s about priorities.” – Tom Brady

8. “I think sometimes in life the biggest challenges end up being the best things that happen in your life.” – Tom Brady

9. “Mentally, the only players who survive in the pros are the ones able to manage all their responsibilities. Everybody struggles in different ways.” – Tom Brady

11. “I am not a person that’s self-satisfied just being out there. I want to go out there and play great.” – Tom Brady

13. “I don’t want to wake up and be bored. That’s probably my greatest fear is to have nothing to do. What better job is there than to play quarterback for an NFL team, and certainly one that I’ve been on for a long time and had success with? I don’t plan on giving it up any time soon.” – Tom Brady

15. “I’m not a person who defends myself very often. I kind of let my actions speak for me.” – Tom Brady

16. “Things don’t correct themselves, you’ve got to go out there and work hard to correct them.” – Tom Brady

18. “The true competitors, though, are the ones who always play to win.” – Tom Brady

20. “A lot of people don’t believe in you. It’s obvious by now, six other quarterbacks taken and 198 other picks. And I always thought ‘you know what, once I get my shot, I’m gonna be ready. I’m gonna really take advantage of that.” – Tom Brady

22. “When I’m out on the football field, I have so much confidence in what I’m doing.” – Tom Brady

23. “You never get over losses. I’ve never gotten over your loss I’ve had in my career. They always stick with me.” – Tom Brady

24. “You need to think outside the box. You need to think differently if you want to sustain what, for me, is my peak performance: the very best that I can achieve as an athlete every day.” – Tom Brady

25. “You can’t go out and practice average on Wednesday, average on Thursday, okay on Friday and then expect to play well on Sunday.” – Tom Brady

26. “I am not a person that’s self satisfied just being out there. I want to go out there and play great.” – Tom Brady

28. “See, there are a lot of guys who are all talk. They say they want to work harder and be the best, but they never pay the price.” – Tom Brady

29. “A lot of times I find that people who are blessed with the most talent don’t ever develop that attitude, and the ones who aren’t blessed in that way are the most competitive and have the biggest heart.” – Tom Brady

30. “I can’t do anything with what’s happened in the past. I have to just go forward with the most awareness I can going forward and trying to be the best I can be for our team.” – Tom Brady