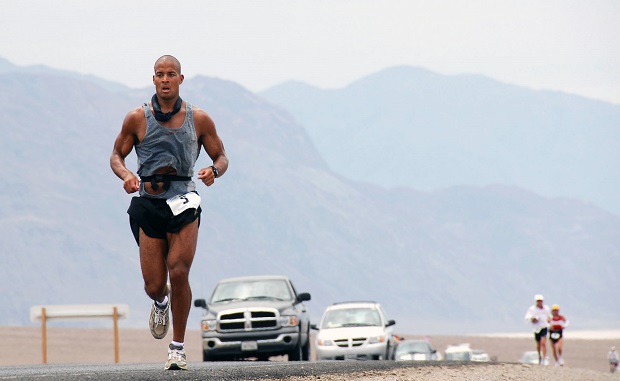 David Goggins is an American ultramarathon runner and triathlete who once held the record for the most pull-ups ever done within a 24 hour period. He also used to be a United States Navy SEAL as well as a member of the United States Air Force Tactical Air Control Party. Goggins was stationed in Afghanistan and Iraq in the early to mid-2000s.

Goggins is known for many things, including his acts of charity. He started long-distance running to raise money for the Special Operation Warrior Foundation, which gives college scholarships to children of fallen special operations soldiers.

In 2005, Goggins entered the San Diego One Day, which is a 24-hour ultramarathon held at Hospitality Point in San Diego. He ran an astonishing 100 miles in just under 19 hours. He has also participated in a number of other competitive athletic events, including the Badwater-135 in 2013. He finished 18th in this competition after taking a break from the event for a number of years.

1. “Everybody comes to a point in their life when they want to quit. But it’s what you do at that moment that determines who you are.” – David Goggins

3. “It’s so easy to be great nowadays, because everyone else is weak. If you have any mental toughness, if you have any fraction of self-discipline; The ability to not want to do it, but still do it; If you can get through to doing things that you hate to do: on the other side is greatness.” – David Goggins

4. “Failure is an option. It’s what you do with the failure that makes you who you are. Our failures mold us. I have failed at several things in my life. What sets some of us apart, is that when we fail, we can’t sleep at night. It haunts us until we have our time at redemption.” – David Goggins

5. “We live in an external world. Everything, you have to see it, touch it. If you can for the rest of your life, live inside yourself – to find greatness, you have to go inside.” – David Goggins

6. “The biggest thing is to stop thinking you deserve anything. You, me, or anyone else doesn’t deserve shit! So whenever you think you deserve a day off “just because”…rethink that shit! It’s that kind of attitude that makes you like most people.” – David Goggins

8. “Having lived the life I’ve lived, and seeing the other side, not being afraid to attack what was in front of me has made me happy.” – David Goggins

9. “Go in the military. Get your ass kicked. Do things you hate to do.” – David Goggins

10. “When you think that you are done you’re only 40% in to what your body’s capable of doing.that’s just the limits that we put on ourselves.” – David Goggins

11. “Suffering is the true test of life.” – David Goggins

14. “Everybody comes to a point in their life when they want to quit. But it’s what you do at that moment that determines who you are.” – David Goggins

15. “I’m different than most people…when I cross the finish line of a big race, I see that people are ecstatic, but I’m thinking about what I’m going to do tomorrow. It’s as If my Journey is everlasting and there is no finish line.” – David Goggins

30 Elliott Hulse Quotes That Will Motivate You