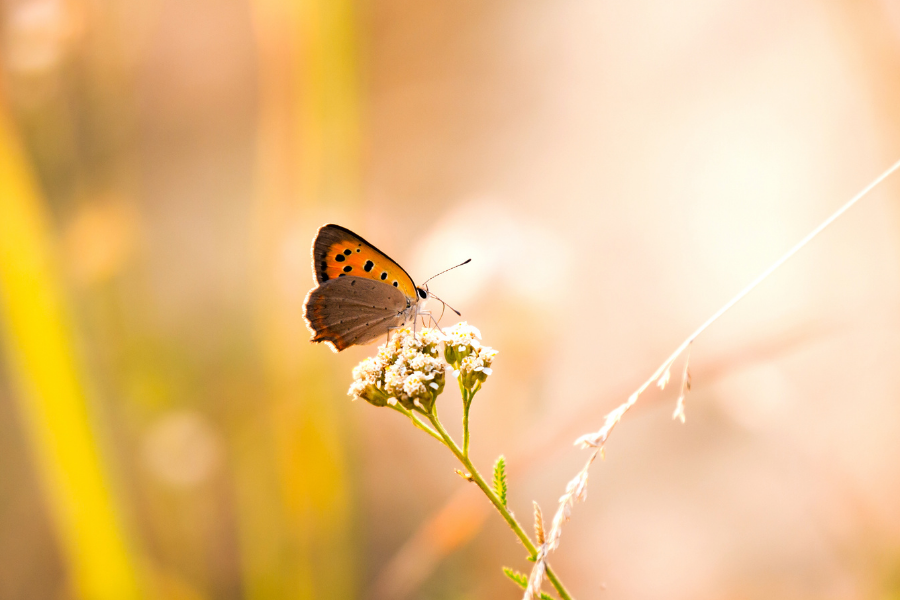 In your pursuit of success, there is always the possibility of being clouded by the glitz and glamor of the external material world. You aspire more to acquiring ostentatious wealth, posting every goal for an audience, or even exaggerating every little achievement you reached. Ego is indeed the enemy, and most of the time you have to remind yourself to be grounded. Read these best motivational quotes and you might just be more self-aware and find your balance once again. 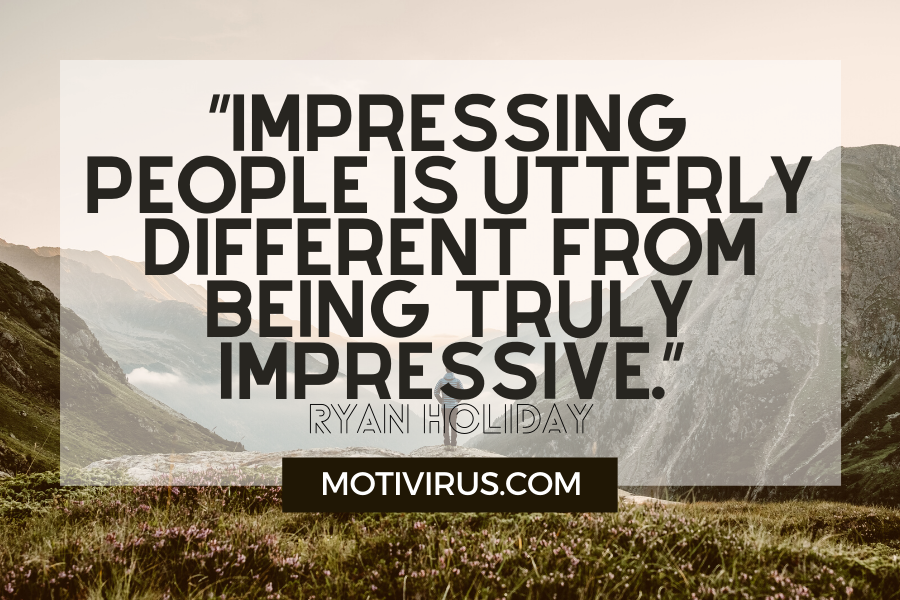 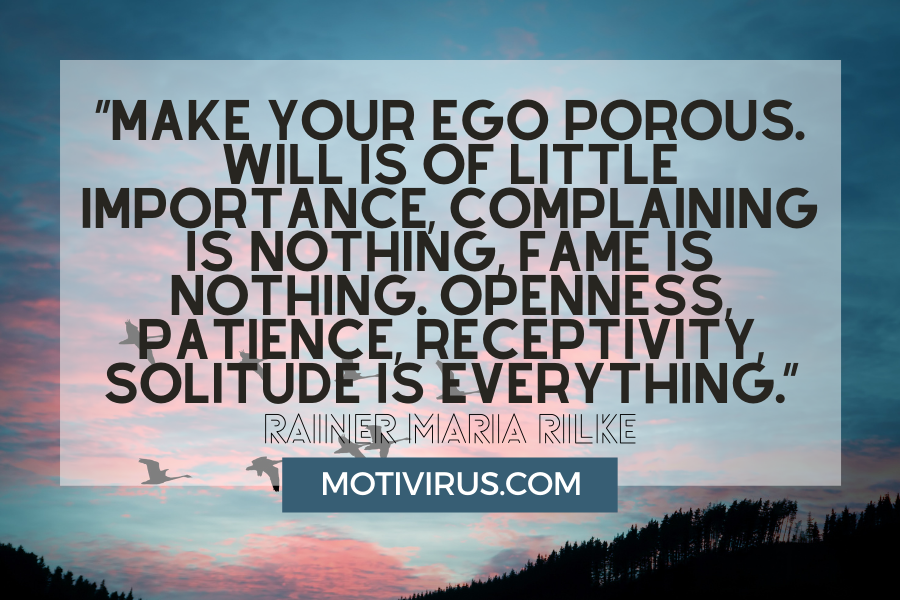 “Make your ego porous. Will is of little importance, complaining is nothing, fame is nothing. Openness, patience, receptivity, solitude is everything.”
― Rainer Maria Rilke

“The problem with introspection is that it has no end.”
― Philip K. Dick

“The ego hurts you like this: you become obsessed with the one person who does not love you. blind to the rest who do.”
― Warsan Shire 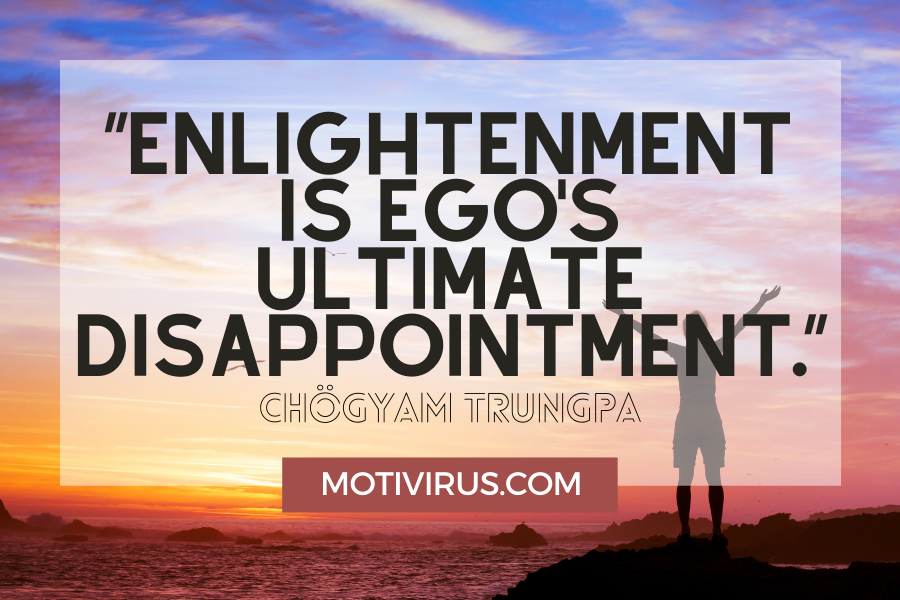 “There are two circumstances that lead to arrogance: one is when you’re wrong and you can’t face it; the other is when you’re right and nobody else can face it.”
― Criss Jami

“If a man thinks he is not conceited, he is very conceited indeed.”
― C.S. Lewis

“And that’s what is so insidious about talk. Anyone can talk about himself or herself. Even a child knows how to gossip and chatter. Most people are decent at hype and sales. So what is scarce and rare? Silence. The ability to deliberately keep yourself out of the conversation and subsist without its validation. Silence is the respite of the confident and the strong.”
― Ryan Holiday 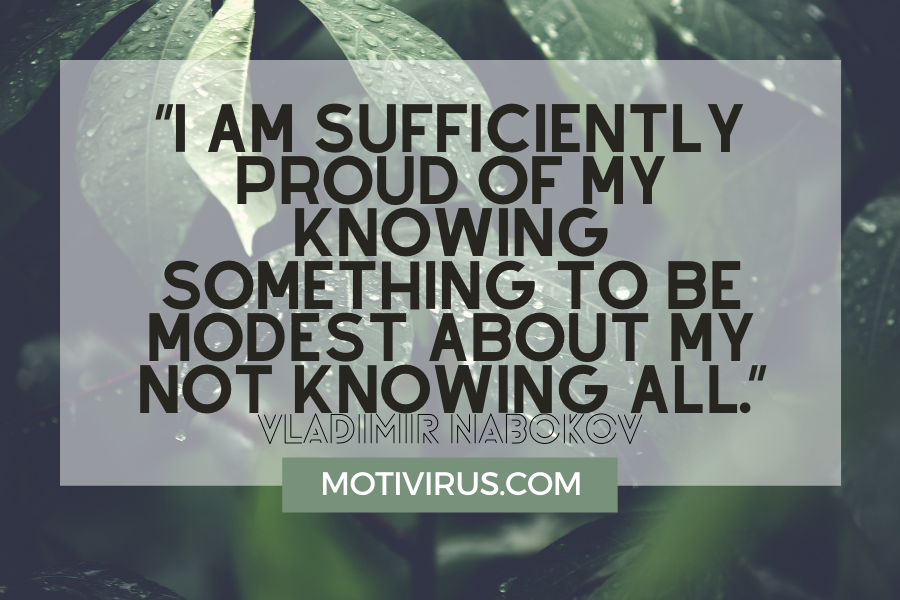 “I am sufficiently proud of my knowing something to be modest about my not knowing all.”
― Vladimir Nabokov

“The ego is the false self-born out of fear and defensiveness.”
― John O’Donohue 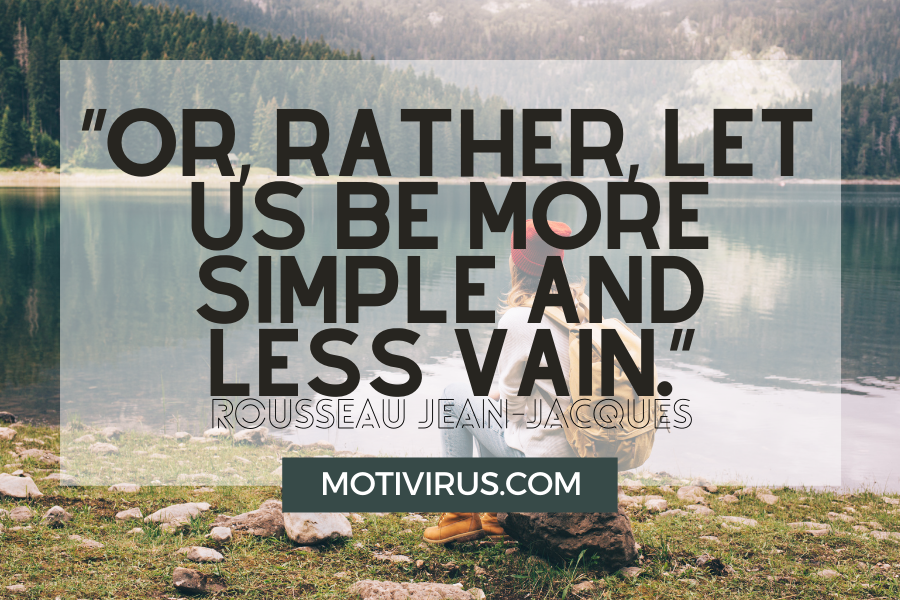 “Or, rather, let us be more simple and less vain.”
― Rousseau Jean-Jacques

“The moment you become aware of the ego in you, it is strictly speaking no longer the ego, but just an old, conditioned mind-pattern. Ego implies unawareness. Awareness and ego cannot coexist.”
― Eckhart Tolle

“The Ego is a veil between humans and God. In prayer all are equal.”
― Rumi 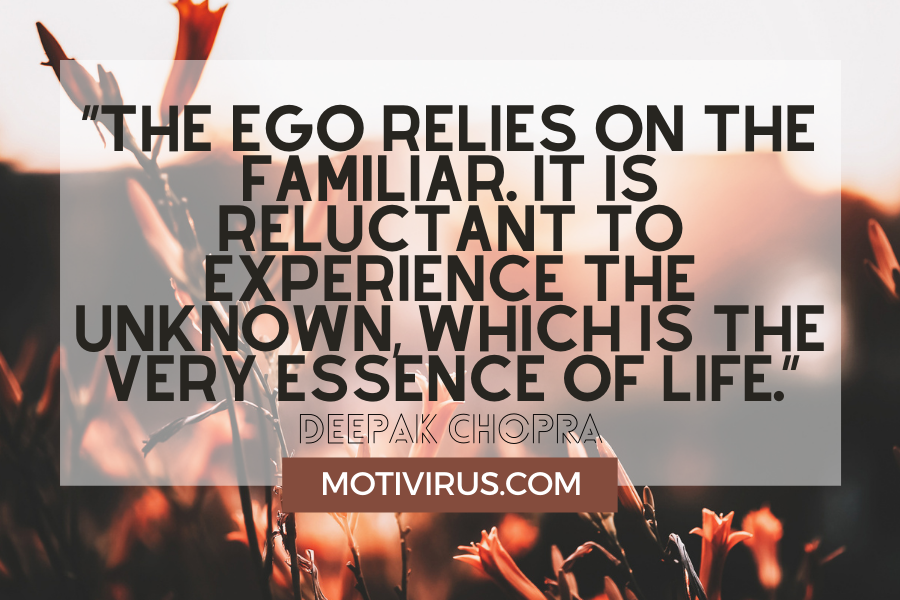 “The ego relies on the familiar. It is reluctant to experience the unknown, which is the very essence of life.”
― Deepak Chopra

“Those who have subdued their ego understand that it doesn’t degrade you when others treat you poorly; it degrades them.”
― Ryan Holiday 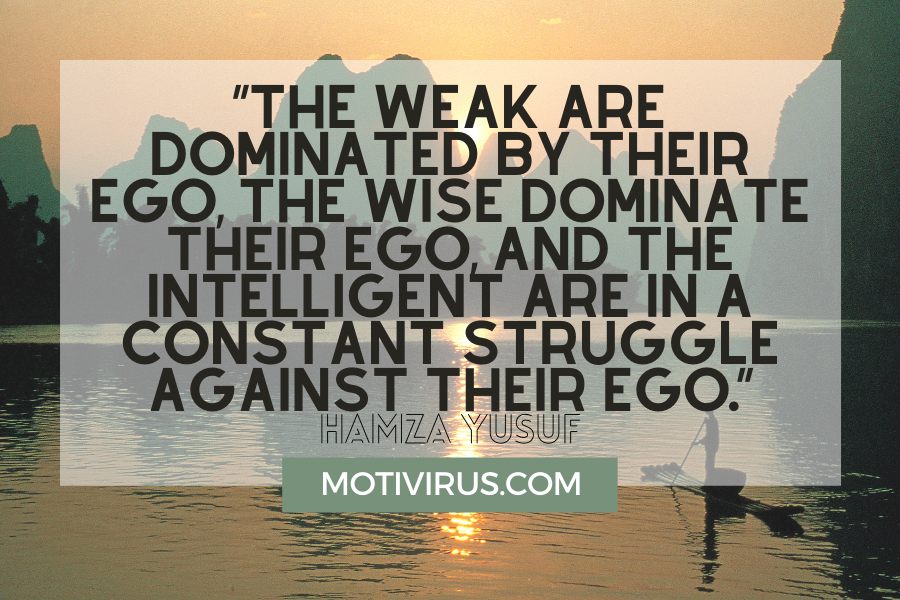 “The weak are dominated by their ego, the wise dominate their ego, and the intelligent are in a constant struggle against their ego.”
― Hamza Yusuf

“I don’t know about your true form, but the weight of your ego sure is pushing the crust of the earth toward the breaking point.”
― Jim Butcher

“Almost universally, the kind of performance we give on social media is positive. It’s more “Let me tell you how well things are going. Look how great I am.” It’s rarely the truth: “I’m scared. I’m struggling. I don’t know.”
― Ryan Holiday 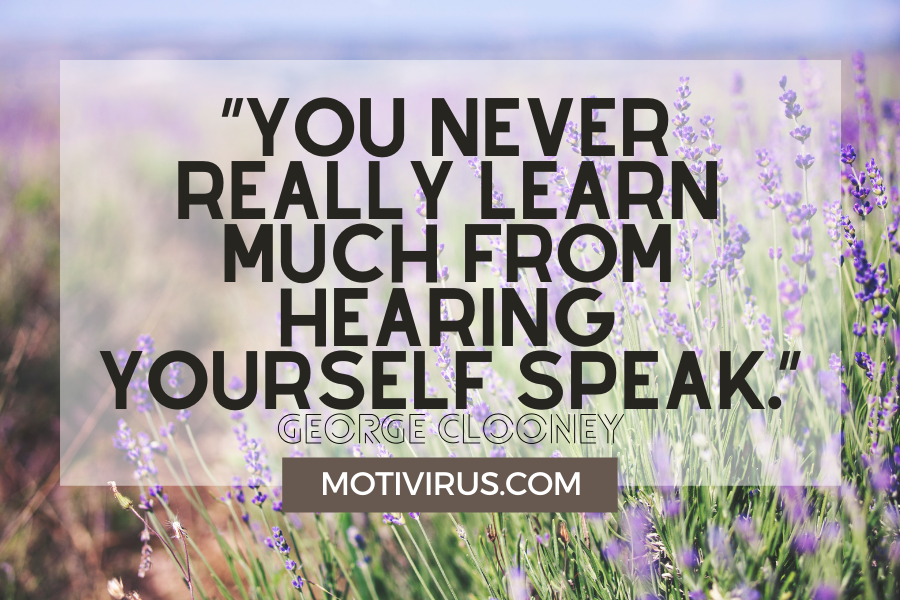 “You never really learn much from hearing yourself speak.”
― George Clooney

“Accomplishments don’t erase shame, hatred, cruelty, silence, ignorance, discrimination, low self-esteem or immorality. It covers it up, with a creative version of pride and ego. Only restitution, forgiving yourself and others, compassion, repentance and living with dignity will ever erase the past.”
― Shannon L. Alder

“The most common ego identifications have to do with possessions, the work you do, social status and recognition, knowledge and education, physical appearance, special abilities, relationships, person and family history, belief systems, and often nationalistic, racial, religious, and other collective identifications. None of these is you.”
― Eckhart Tolle 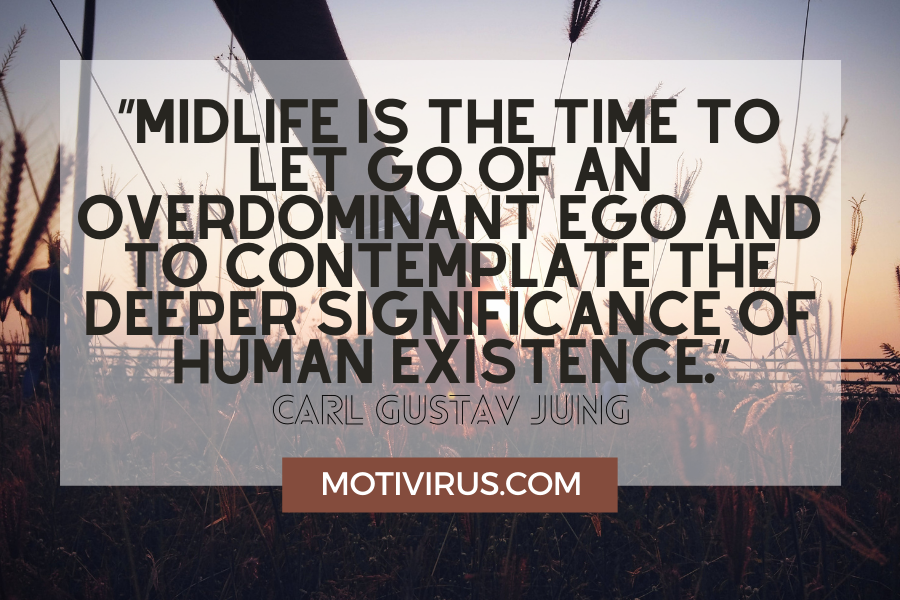 “Midlife is the time to let go of an overdominant ego and to contemplate the deeper significance of human existence.”
― Carl Gustav Jung

“Forget the self and you will fear nothing, in whatever level or awareness you find yourself to be.”
― Carlos Castaneda

“When we remove ego, we’re left with what is real. What replaces ego is humility, yes—but rock-hard humility and confidence. Whereas ego is artificial, this type of confidence can hold weight. Ego is stolen. Confidence is earned. Ego is self-anointed, its swagger is artifice. One is girding yourself, the other gaslighting. It’s the difference between potent and poisonous.”
― Ryan Holiday 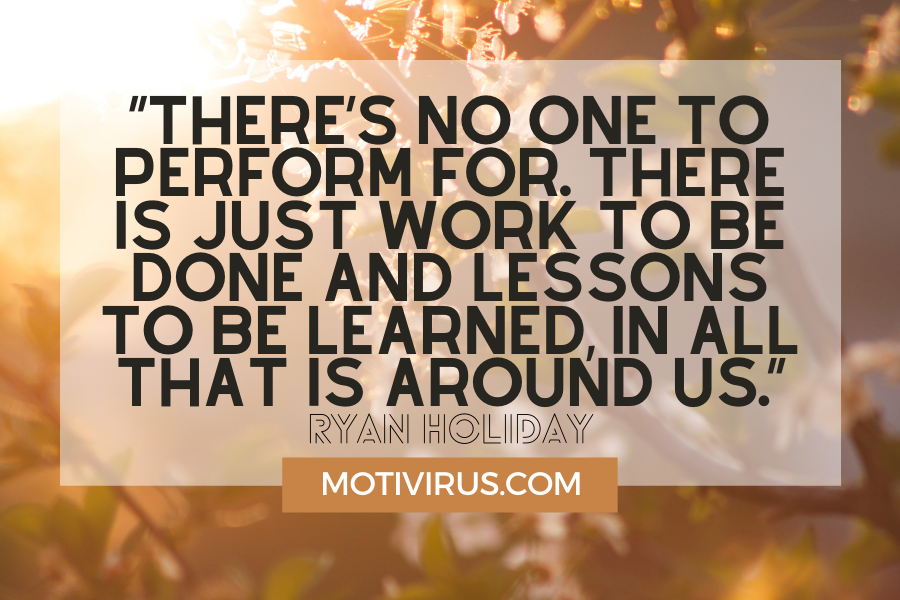 “There’s no one to perform for. There is just work to be done and lessons to be learned, in all that is around us.”
― Ryan Holiday

“Life lived in the absence of the psychedelic experience that primordial shamanism is based on is life trivialized, life denied, life enslaved to the ego.”
― Terence McKenna

“Time and time again does the pride of man influence his very own fall. While denying it, one gradually starts to believe that he is the authority, or that he possesses great moral dominion over others, yet it is spiritually unwarranted. By that point he loses steam; in result, he falsely begins trying to prove that unwarranted dominion by seizing the role of a condemner.”
― Criss Jami 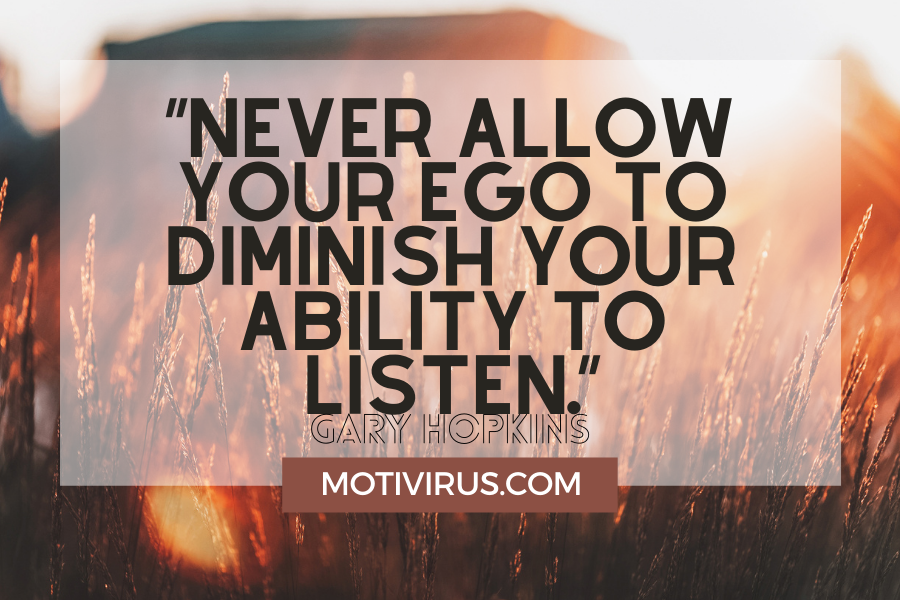 “Never allow your ego to diminish your ability to listen.”
― Gary Hopkins

“When success begins to slip from your fingers—for whatever reason—the response isn’t to grip and claw so hard that you shatter it to pieces. It’s to understand that you must work yourself back to the aspirational phase. You must get back to first principles and best practices.”
― Ryan Holiday 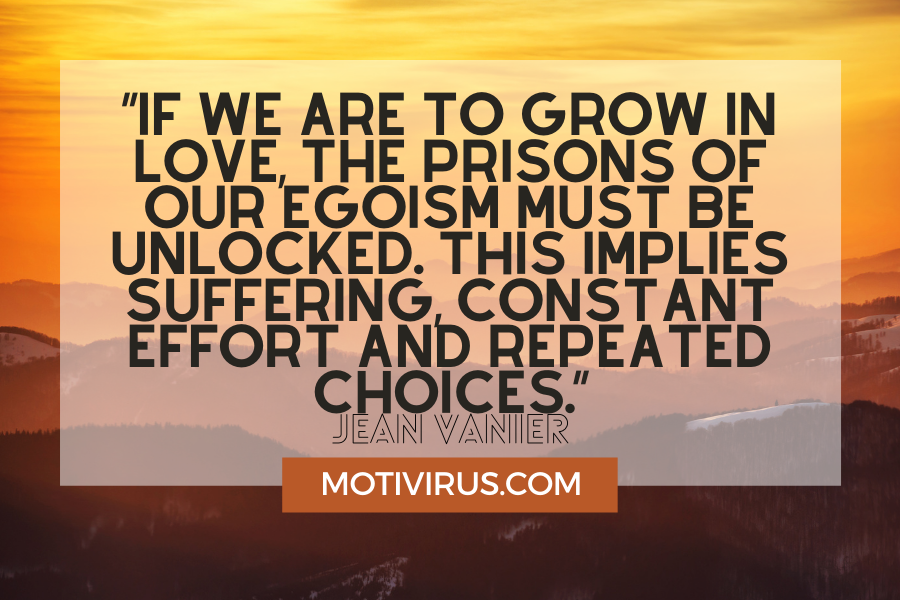 “If we are to grow in love, the prisons of our egoism must be unlocked. This implies suffering, constant effort and repeated choices.”
― Jean Vanier

“The minute you start compromising for the sake of massaging somebody’s ego, that’s it, game over.”
― Gordon Ramsay 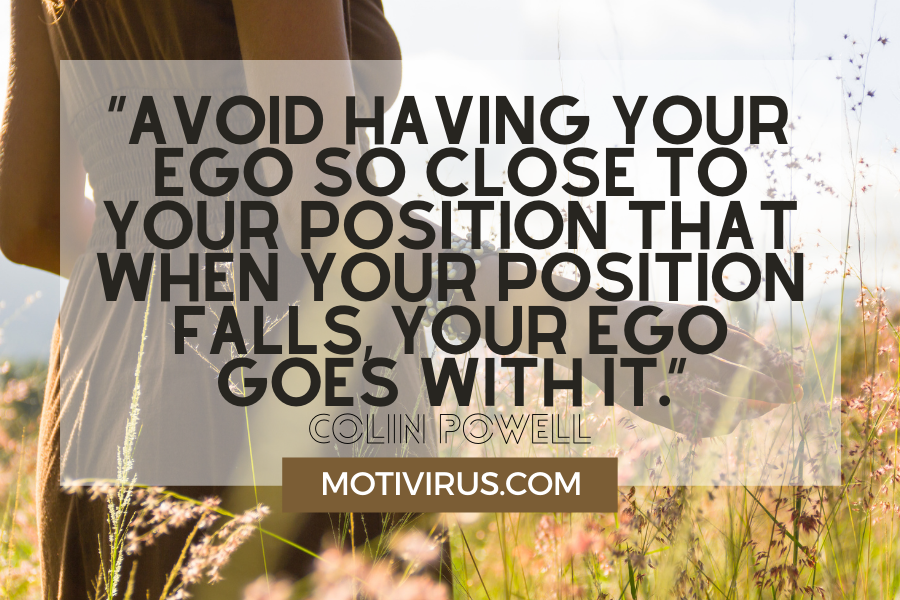 “The real opposition is that between the ego-bound man, whose existence is structured by the principle of having, and the free man, who has overcome his egocentricity.”
― Erich Fromm 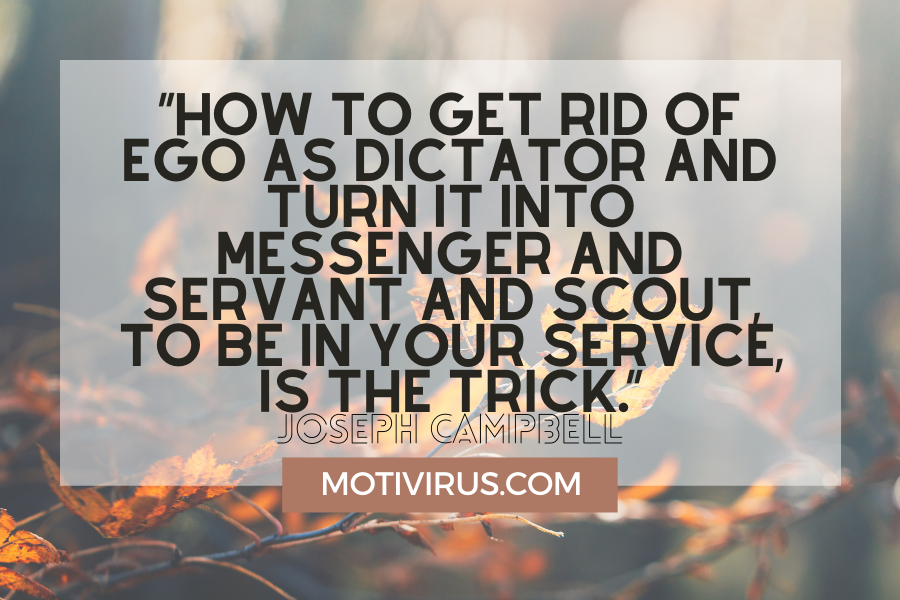 “How to get rid of ego as dictator and turn it into messenger and servant and scout, to be in your service, is the trick.”
― Joseph Campbell

“The only real failure is abandoning your principles. Killing what you love because you can’t bear to part from it is selfish and stupid. If your reputation can’t absorb a few blows, it wasn’t worth anything in the first place.”
― Ryan Holiday 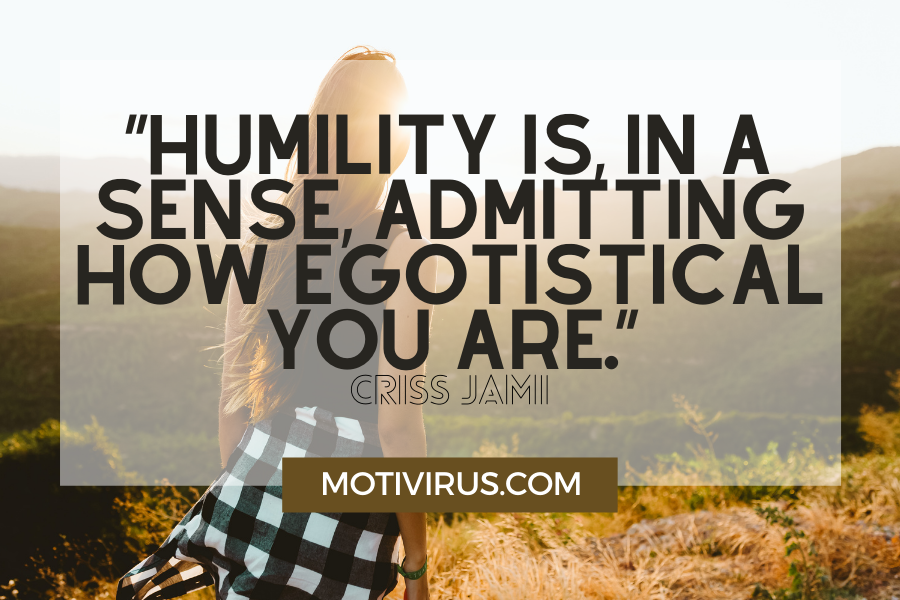 “Humility is, in a sense, admitting how egotistical you are.”
― Criss Jami 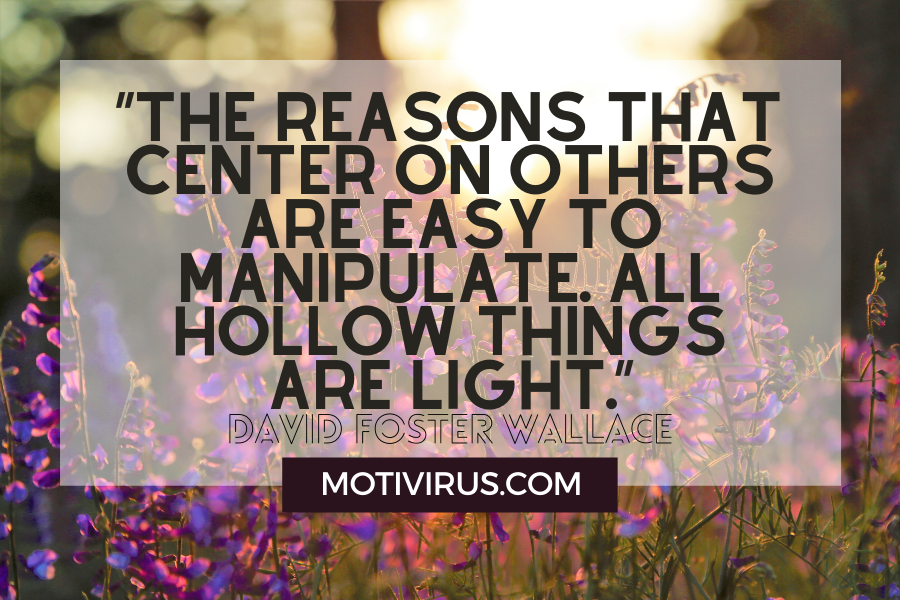 “The reasons that center on others are easy to manipulate. All hollow things are light.”
― David Foster Wallace

“The human ego prefers anything, just about anything, to falling, or changing, or dying. The ego is that part of you that loves the status quo – even when it’s not working. It attaches to past and present and fears the future.”
― Richard Rohr

“Your potential, the absolute best you’re capable of—that’s the metric to measure yourself against. Your standards are. Winning is not enough. People can get lucky and win. People can be assholes and win. Anyone can win. But not everyone is the best possible version of themselves.”
― Ryan Holiday

“Most successful people are people you’ve never heard of. They want it that way. It keeps them sober. It helps them do their jobs.”
― Ryan Holiday

“Attempting to destroy something out of hate or ego often ensures that it will be preserved and disseminated forever.”
― Ryan Holiday 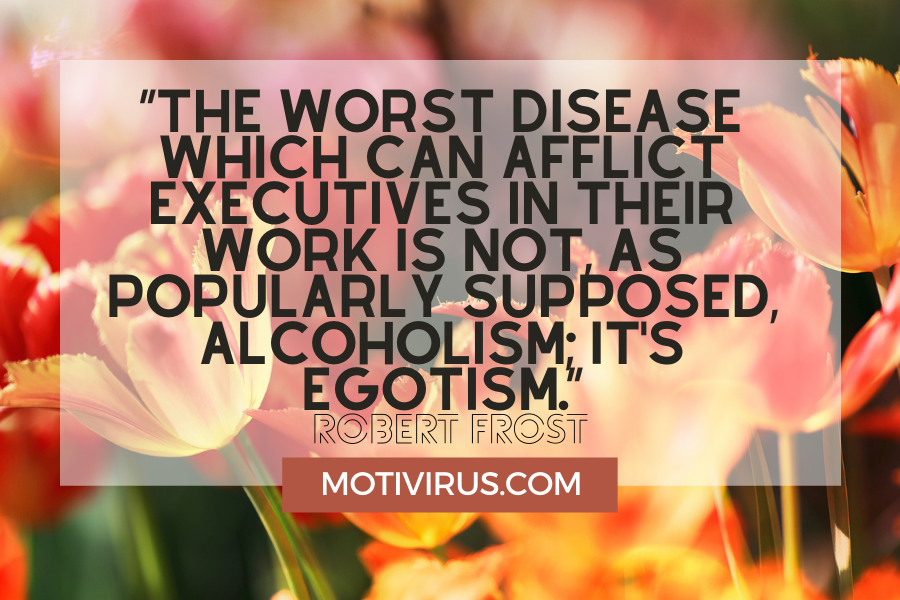 “The worst disease which can afflict executives in their work is not, as popularly supposed, alcoholism; it’s egotism.”
― Robert Frost

“Work is finding yourself alone at the track when the weather kept everyone else indoors. Work is pushing through the pain and crappy first drafts and prototypes. It is ignoring whatever plaudits others are getting, and more importantly, ignoring whatever plaudits you may be getting. Because there is work to be done. Work doesn’t want to be good. It is made so, despite the headwind.”
― Ryan Holiday 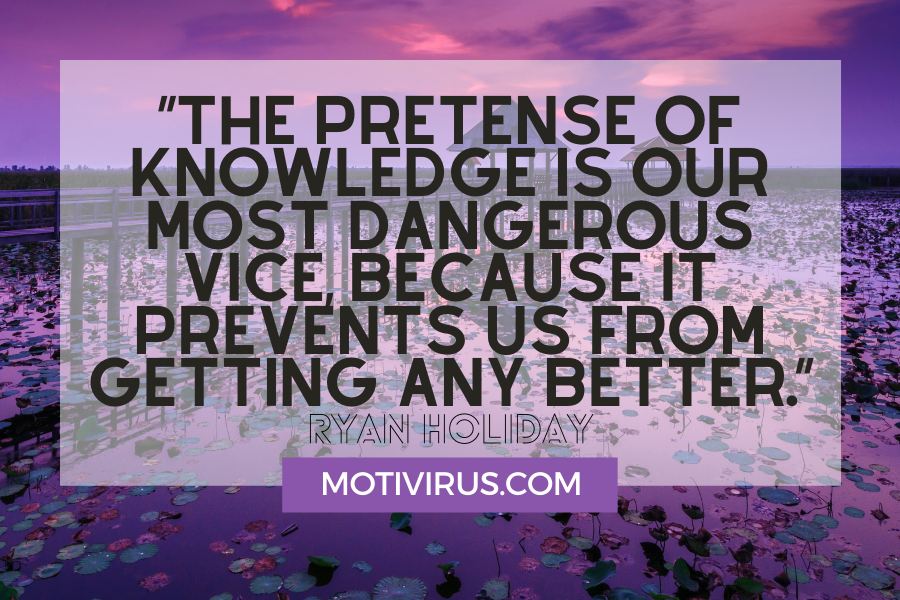 “The pretense of knowledge is our most dangerous vice, because it prevents us from getting any better.”
― Ryan Holiday

“The greatest win is walking away and choosing not to engage in drama and toxic energy at all.”
― Lalah Delia

“As our island of knowledge grows, so does the shore of our ignorance.”
― Ryan Holiday

“When true happiness shows up, the ego is bored with it: It’s too plain, too ordinary, and it doesn’t leave us feeling special or above the fray. It doesn’t take away our problems, which is the ego’s idea of happiness. The ego wants no more difficulties: no ore sickness, no more need for money, no more work, no more bad feelings, only unending pleasure and bliss. Such perfection is the ego’s idea of a successful life. However, the happiness the ego dreams of will never be attained by anyone. The ego denies the reality of this dimension, where challenges are necessary to evolution and blissful states and pleasure come and go.”
― Gina Lake 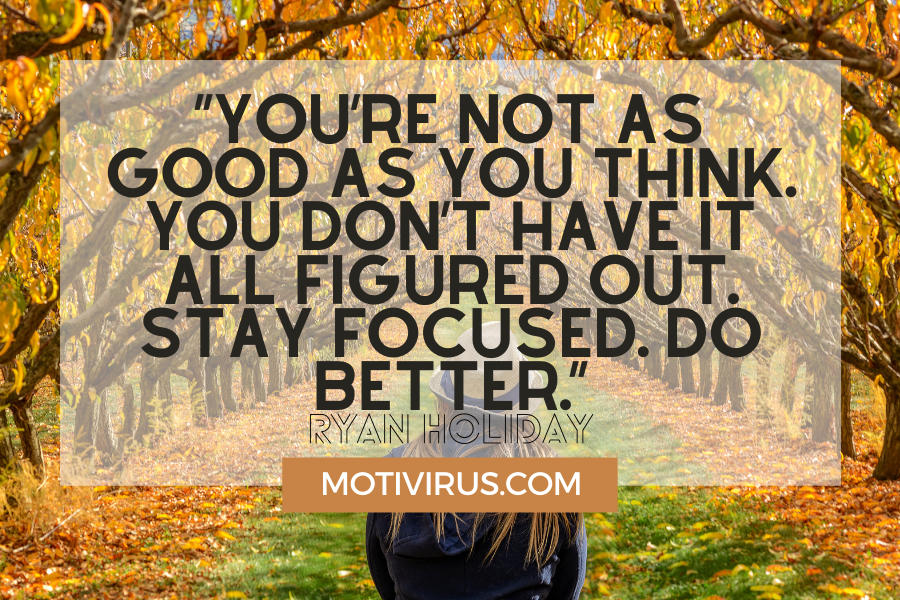 “You’re not as good as you think. You don’t have it all figured out. Stay focused. Do better.”
― Ryan Holiday

“It’s a temptation that exists for everyone—for talk and hype to replace action.”
― Ryan Holiday

“You’re thinking that people don’t keep up old jealousies for twenty years or so. Perhaps not. Not just primitive, brute jealousy. That means a word and a blow. But the thing that rankles is hurt vanity. That sticks. Humiliation. And we’ve all got a sore spot we don’t like to have touched.”
― Dorothy L. Sayers

“Ego is the enemy of what you want and of what you have: Of mastering a craft. Of real creative insight. Of working well with others. Of building loyalty and support. Of longevity. Of repeating and retaining your success. It repulses advantages and opportunities. It’s a magnet for enemies and errors. It is Scylla and Charybdis.”
― Ryan Holiday 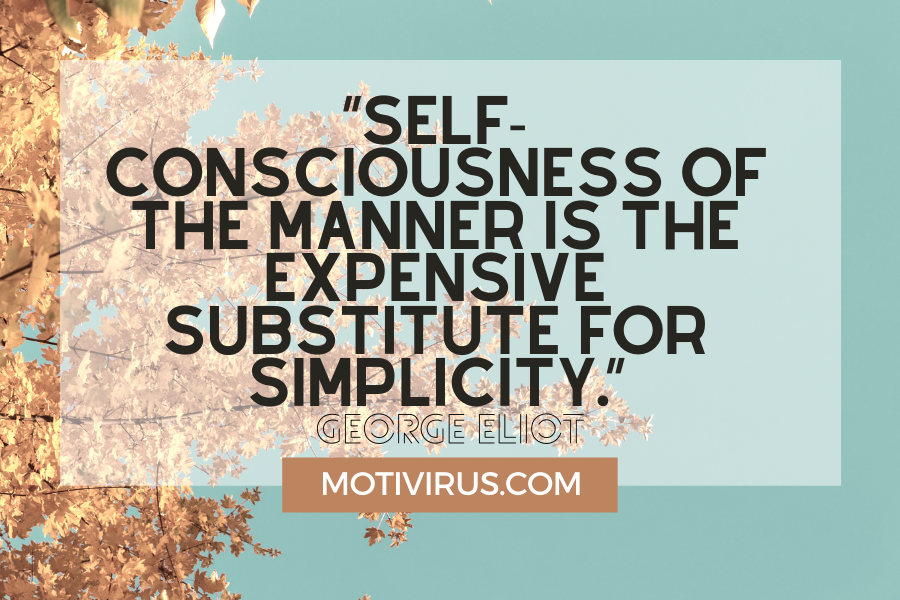 “Self-consciousness of the manner is the expensive substitute for simplicity.”
― George Eliot

“Accept the long night patiently, quietly, humbly, and resignedly as intended for your true good. It is not a punishment for sin committed but an instrument of annihilating egoism.”
― Paul Brunton 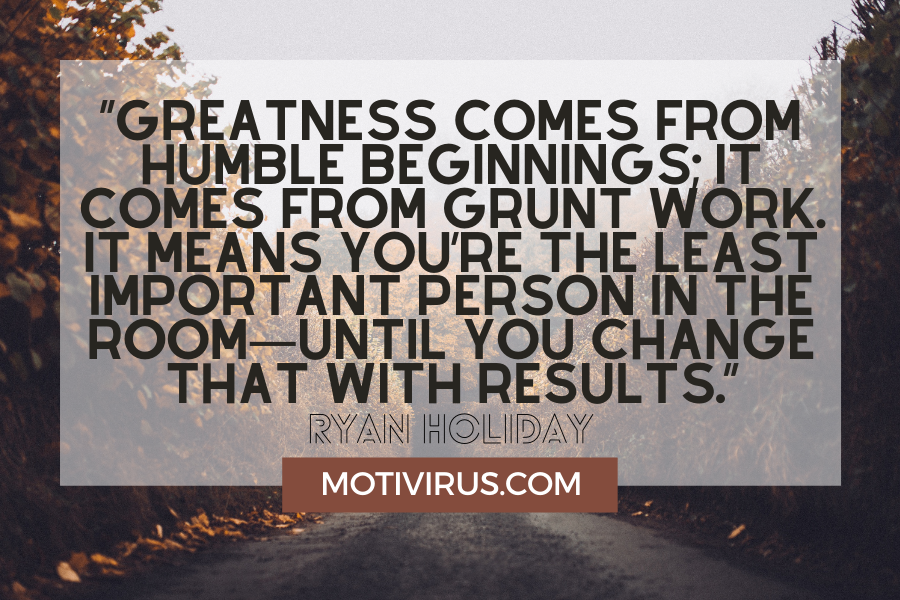 “Greatness comes from humble beginnings; it comes from grunt work. It means you’re the least important person in the room—until you change that with results.”
― Ryan Holiday

“We will learn that though we think big, we must act and live small in order to accomplish what we seek. Because we will be action and education focused, and forgo validation and status, our ambition will not be grandiose but iterative—one foot in front of the other, learning and growing and putting in the time.”
― Ryan Holiday

“Do I need this? Or is it really about ego?”
― Ryan Holiday

There’s no easy way to succeed but stripping your ego makes up for it and helps you achieve intentional living. You have to accept the fact that failure and change is inevitable but if you won’t let your life be merely dictated by ego then your far more successful than others. Read about the best motivational quotes on failure and reaching success here!

50 Best Motivational Quotes On Self Development